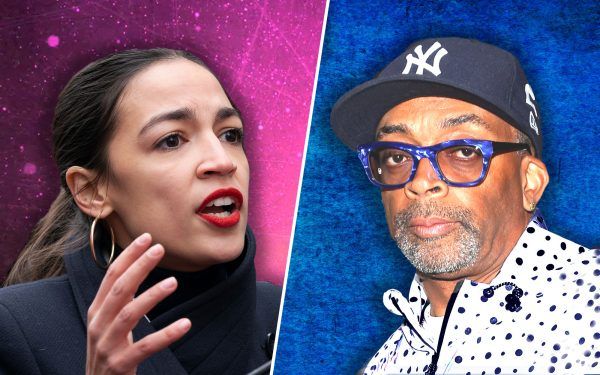 An anonymous Democratic aide slammed Rep. Alexandria Ocasio-Cortez (D-N.Y.) (shown above, beside New York City resident Spike Lee) in an interview for a piece in The New York Post this week — claiming that the self-described socialist has “no plans to serve” her constituents.

The story noted that the freshman congresswoman often dismisses those in her district — and that she does not answer phone calls.

Dem Aide Goes Scorched Earth On AOC; ‘No Plans To Serve The People’…

EVEN DEMS ARE BEGINNING TO SEE THE TRUTH WITH THESE RADICALS…

RT if you think she UNFIT for office… https://t.co/nMActUm0gL [2]

A Democrat congressional aide cited in the story told The New York Post, “She has no plans to serve the people. That’s why she has no constituent services operation.”

“If you’re a grandma in Queens who needs help with her Medicare and you call AOC’s ‘district office,’ you get a recording that tells you to visit the website instead,” the aide said.

Related: Here’s Why College Kids Prefer the Most Socialist Candidates [4]

“What kind of elitist nonsense is that?” he or she continued. “Shameful. It’s all shameful.”

Not surprisingly, AOC is reportedly very unpopular in her district, with only 10 people in that area known to have donated to her re-election campaign.

“The average freshman representative’s re-election campaign received $107,141.29 in itemized contributions from their constituents in the first half of 2019, FEC filings the DCNF analyzed show,” The Daily Caller reported [5].

“Ocasio-Cortez’s reported in-district fundraising haul of $1,525.50 was just 1.4 percent of that average.”

Poll numbers from within Ocasio-Cortez’s district have yielded similar negative results about how people there view her.

A door-to-door poll from Stop The AOC PAC [9] found the following results:

Obviously none of this is good news for AOC.

And most people could have seen this coming. Ocasio-Cortez seems more concerned about her own celebrity than about actually representing the voters who elected her in her district, in our view.

Sure, she was able to topple a weak incumbent in her overwhelmingly Democratic New York district in the fall 2019 midterms, but it will likely be just as easy for another challenger to take her down in the same dramatic fashion in 2020. [10]