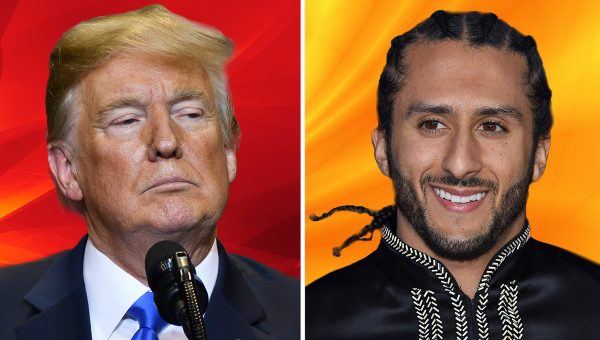 President Donald Trump on Friday addressed the topic of former quarterback Colin Kaepernick [1] (shown above right), saying he would “love” to see the controversial player return to the NFL, but only “if he’s good enough.”

“I think if he was good enough — I know the owners, I know Bob Kraft, I know so many of the owners — if he’s good enough, they’d sign him,” Trump continued.

“So if he’s good enough, I know these people — they would sign him in a heartbeat. They will do anything they can to win games.”

“But I don’t want to see him come in because somebody thinks it’s a good PR move. If he’s good enough, he will be in.”

Reporter: Should Colin Kaepernick get an opportunity to play in the NFL?

Trump: “Only If he’s good enough. I know the owners, I know Bob Kraft. They will do anything they can to win games” pic.twitter.com/tTZHyL6oCH [4]

Kaepernick made headlines back in 2016 when he began taking a knee during the playing or singing of the national anthem before his games as a quarterback for the San Francisco 49ers.

He said he was kneeling during the anthem to protest racial inequality in the United States — but many viewed this move as a blatant sign of disrespect against the American flag and those who fight to serve it.

Kaepernick’s protests generated tons of controversy — and Trump himself even criticized him for it in 2017, saying the kneeling was “hurting the game” and that offended fans should walk out of games.

Colin Kaepernick led the 49ers to a losing record during his final season with the team.

Kaepernick opted out of his contract with the 49ers in March of 2017, and he has not been signed by any other team since.

He’s become something of a martyr for liberals who claim he has not been signed because NFL teams really are racist.

Others, however, have pointed out that Kaepernick led the 49ers to a losing record during his final season with the team, and that he may not have been signed again because he isn’t good enough to play anymore.

This Objectivist [6] piece is used by permission.