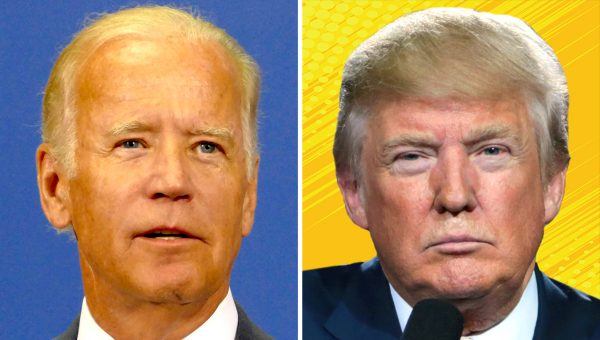 Former Vice President Joe Biden [1] appeared to dismiss voters concerned about his age, telling them not to vote for him in the 2020 Democratic primary race [2].

“I say if they’re concerned, don’t vote for me,” Biden said while speaking to reporters in Keene, New Hampshire.

When a reporter told Biden that voters he talked to were wondering if the former senator from Delaware had lost a step, Biden answered, “What do you think?”

The Democratic frontrunner has committed a number of verbal slip-ups that put him under scrutiny.

During the same visit on Saturday, Biden appeared to believe he was in neighboring Vermont [3].

“I’ve been here a number of times … I love this place,” Biden said when asked for his impression of the town.

Joe Biden doesn’t know what state he is in.

While in Keene, New Hampshire, he said: "I’ve been here a number of times… I love this place. Look, what’s not to like about Vermont in terms of the beauty of it?” pic.twitter.com/3DjOYuHfSx [4]

A day earlier, Biden was discussing the assassinations of civil rights activist Martin Luther King Jr. and former Sen. Robert F. Kennedy (D-N.Y.). when he asked his audience to “imagine what would have happened if, God forbid, Barack Obama had been assassinated after becoming the de facto nominee.”

On Saturday, Biden said that his words were “misstated.”

“I found that kind of interesting, the way it was characterized in your papers,” the former vice president said. “I was making the point that my generation in ’68 faced a crisis, a significant crisis, and to make the point to the people in the room that — I said, just imagine if the same thing happened in your generation. That’s what the context was. Words matter a lot, and I got the point across. You’re the only guys that didn’t understand it.”

Biden also claimed to support “truth over facts” and incorrectly stated that two high-profile mass shootings in August occurred in Michigan and Houston.

He quickly corrected himself, saying the shootings occurred in El Paso, Texas, and Dayton, Ohio.

President Donald Trump [7], who has himself had some verbal slips, nonetheless highlighted the issue when he asked his Twitter followers whether anybody actually believed the former vice president was “mentally fit” to serve as commander-in-chief.

When asked about the gaffes, a senior Biden adviser dismissed those concerns as part of a “press narrative.”

“If you were to look at the coverage in Iowa … and juxtapose the local newspapers and local television coverage to national media coverage, you would have thought these reporters were at two different events,” senior adviser Symone Sanders previously said [8].

Biden’s brain surgeon has insisted that his patient was mentally healthy and had no brain damage.

But the gaffes appeared to have raised enough concerns that allies of the former vice president reportedly suggested he scale back the number of events he did on the campaign trail. David Axelrod, a former adviser to then-President Barack Obama, blasted that advice [9], arguing this past Thursday that he shouldn’t be cloistered as a presidential candidate.

“This is bad advice. You can’t cloister the candidate and win,” tweeted Axelrod, the chief strategist of Obama’s 2008 and 2012 campaigns. “He either can cut it or he can’t, and the only way he can prove he can is to be an active and vigorous candidate. He’s running for president of the United States, for God’s sake!”

Biden’s brain surgeon has insisted that his patient was mentally healthy and had no brain damage.

Related: Biden’s Brain Surgeon Weighs In on His Patient’s Health [10]

“He is every bit as sharp as he was 31 years ago. I haven’t seen any change,” Dr. Neal Kassell said, according to Politico. [11]

Kassell previously treated Biden for brain aneurysms and has monitored him for brain damage since his surgeries.

Sam Dorman is a reporter with Fox News. Fox News’ Joseph A. Wulfsohn and Samuel Chamberlain contributed to this Fox News [12] report, which is used by permission.

Read more at Fox News:
Trump’s ‘Chopper Talk’ News Conferences Blow Away the Media [13]
Painting of Bill Clinton in Blue Dress Was in Epstein’s Mansion: Reports [14]
Jay Z and the NFL Teaming Up on Entertainment Events [15]