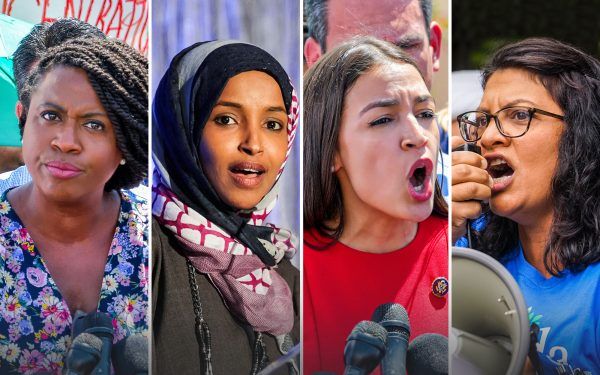 Years ago, then-House Speaker Tip O’Neill (D-Mass.) said with dismissive humor about an upstart member of Congress, “Someone needs to House-train that young pup.”

(For the record, he was talking about then-GOP Rep. John LeBoutillier of New York, who was on a rampage to reform Congress, save the country, destroy the Left, rally the troops, and conquer the land in a victorious sweep of youthful energy. LeBoutillier lasted a single term of two years.)

Well, today we are looking at four young pups who also need to be “House-trained,” in my view.

It was pretty obvious from the start that Rep. Alexandria Ocasio-Cortez (D-N.Y.) (shown above, second from right) was heading in a dangerous direction when she took part in a sit-in outside House Speaker Nancy Pelosi’s office [1] shortly after winning election to the House. AOC also revealed her lack of knowledge of the three branches of government.

She even threatened to silence Donald Trump Jr. if he continued to say things she didn’t agree with or like.

It was a rough couple of weeks — but now, with her new posse in tow, she actually looks kind of smart compared to the other “squad” members. With the media wind at her back, Pelosi in virtual shackles, and the Democrat Party still imploding over the fact that Donald Trump beat Hillary Clinton in 2016, these four young women have pretty much determined they are the face of the new Democrat Party.

Related: These Four Members of the Democratic Squad Have Done ‘Squat’ So Far [2]

As a former cheerleader, I find it hard to refer to these four as the “squad,” since that was our moniker. So I have added a descriptive qualifier to their new name to ensure they’re not being confused with the pom-pom girls of old. They are the Commie Squad, as I see it — since “commie” describes their ultimate agenda.

Communism and socialism are twins separated at birth, but they have different meanings for people today. Kids think socialism means social justice, or social media, or waving at someone in the grocery store. That’s just being social.

But communism is a different story. It has baggage. It brings up memories of duck and cover, bomb shelters, Gulags and refugees dying to get out of the Soviet Union — or killed if they stayed in. Millions died under that regime.

Everyone knew, and knows, that communism kills. It’s not just about an elite government that controls every aspect of everyone’s lives. It is a deadly form of slavery in which, if you disagree, speak out of turn, or don’t use the right pronoun — you can and will be killed or imprisoned.

It’s a much more effective and accurate word to use when referring to these four women. As a mom and an elder, I see them as acting like spoiled children. They kick you in the shin — then cry to their mom that they hurt themselves.

These four lawmakers have a very dangerous agenda, which is to “fundamentally transform” the country into a totalitarian state in which only the “talented tenth” — as W.E.B. Du Bois called them — would rule over the unwashed, ignorant masses, or the 90 percent.

That is the goal of all communists — but they never read the small print. And they want more communists elected with their end goal in mind — to destroy the country.

You can’t put the toothpaste back in the tube on what President Donald Trump said in terms of telling Rep. Ilhan Omar (D-Minn.) (second from left at the top of this article) to go back where she came from; but during the height of the Cold War, when campus communists were agitating and embracing that philosophy, the battle cry from proud Americans about our country was “Love it or leave it.”

There was no ambiguity about that phrase. It was leveled at any citizen who trashed our liberties — black, white, young, old, man, woman.

The Left in Hollywood always promises — well, threatens — to leave America if a conservative or a Republican wins the White House. How many times has Alec Baldwin, for example, had to pack and unpack his bags? He has disappointed so many people by not keeping his promise.

Would it be racist of me to say, “Hey, Alec, if you don’t like it here, why don’t you keep your promise and get out.” It wouldn’t be racist — but by the Left’s new standards of what is and isn’t racist today, those on the Left would determine that yes, it is.

Judging by this, anyone who wins an argument with someone on the Left is racist. That’s all they have today. A racist, to them, is also someone who challenges leftist dogma with facts.

If you are white and love America and want to protect it from radical, totalitarian ideas, then to them you are racist. But, in their minds, Candace Owens and every other black conservative is called not only a racist but a white supremacist. (I can’t get my head around that one. A black woman is a white supremacist. How does that work?)

Years ago I debated Gloria Steinem, who embraced all of this one-world-government-control-America-bashing philosophy. She said something very interesting that seems to be at the core of what the Left believes. She said we put too much emphasis and importance on the individual and self-determination. It should be about the government and about empowering it, she suggested.

These young congresswomen are pushing for a society in which they are in charge, the rest of us are their minions or slaves, and we will all be commanded to worship the state — or suffer the old Soviet-style consequences,

I had to remind her that the government is made up of individuals. But she suggested that — no, they are a cog in a wheel that turns for a select few.

So these first-term young congresswomen are pushing for a society in which they are in charge, the rest of us are their minions, and we will all be commanded to worship the state — or suffer the old Soviet-style consequences. That’s my view of them.

They’re ignoring the graveyard of failed socialist-communist experiments that dot the world. Oh, and protecting the environment is the last thing on the agenda — because when you are starving and your carbon footprint is shrinking, you aren’t thinking about banning straws.

Since Nancy Pelosi is no Tip O’Neill, it is doubtful she has the ability to “House-train these young pups.”

But if history and statistics are correct, these four will be out of her hair in about 18 months.

Nina May is a writer, producer and director, and currently the showrunner on “Daily Bread,” a faith-based post-apocalyptic drama.