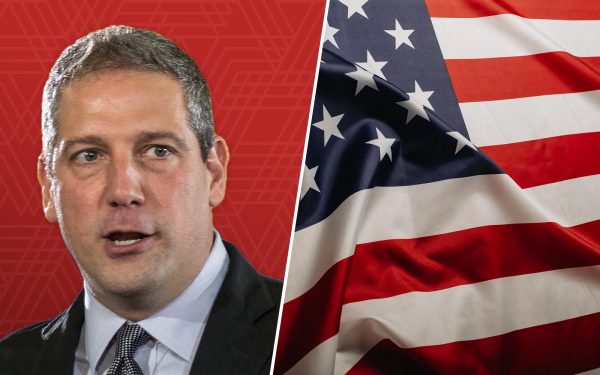 Democratic primary candidate Rep. Tim Ryan of Ohio received significant blowback on social media last night — and still this morning — after he refused to put his hand over his heart during the playing of the national anthem during Tuesday night’s Democratic debate [1].

As the choir sang “The Star-Spangled Banner” at the opening of the Detroit debate, Ryan kept his hands straight down and clasped in front of him — the only candidate standing on stage who did that.

All the other candidates placed their hand over their hearts.

Was he making a political statement, appealing to the radical liberal base — or did Ryan, caught up in the moment, simply and inexplicably forget to put his hand over his heart?

.@RepTimRyan [3] does not put his hand over his heart during the National Anthem before tonight’s #DemDebate [4]https://t.co/QPrGh6lgl7 [5] pic.twitter.com/zDz6ftZaS1 [6]

Rep. Tim Ryan didn’t put his hand over his heart during the national anthem. I guess he’s appealing to the Kaepernick wing of the Democratic Party.

Meghan McCain, co-host of “The View,” chimed in, demanding, “Put your hand over your heart for ‘The Star-Spangled Banner,’ Tim Ryan!!”

No hand over the heart during the national anthem: @RepTimRyan [3] he should not run for President #CNNDebate [10]

Ryan Saavedra of The Daily Wire wrote, “All these candidates have contempt for America, Tim Ryan is just choosing to be honest about it.”

When confronted about the controversy, Ryan appeared to dismiss critics by saying he had no comment other than that he “love[s] this country as much as everybody else.”

If that were the case, placing a hand over the heart would be a reflexive action.

“No, not really,” Rep. Tim Ryan says when asked if he has anything to say about causing a stir for being the only candidate for not putting his hand on his heart during the national anthem at #DemDebate [4].

“The national anthem plays at football games. I put my hand on my heart for the Pledge of Allegiance,” Ryan further explained.

“I don’t know. The choir was singing and it was great.”

Other controversy. During a dramatic battle with House Speaker Nancy Pelosi (D-Calif.) over the House speakership, Ryan used an ethnic slur during an interview with MSNBC’s Chris Matthews, in which he compared those who supported him to fine wine and those who supported the speaker as “dago red wine.”

Ryan recently was placed on a list [15] by Bill Maher of candidates who need to “get the f***” out of the race so that real contenders can rise to the top.

“Tim Ryan. I think he said one good thing. No,” Maher complained.

We’re guessing this unnecessary controversy won’t help the cause.