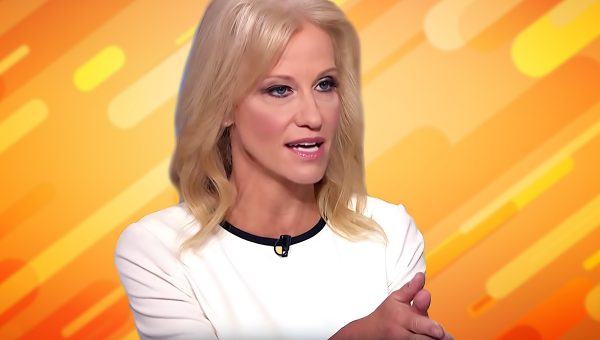 For the Dems, said Conway, “It’s always racism, sexism, xenophobia and it’s getting tired. These four people in this so-called squad — that have done squat in Congress other than pose on magazine covers and go on late-night comedy shows and cause trouble in their own caucus — were under fire a couple short days ago by senior Democrats, elected officials, Greg Meeks, William Lacy Clay [1], Nancy Pelosi,” she said.

“They’re the only four Democrats to vote against any form of humanitarian aid at the border when that vote was taken two weeks ago.”

“Even Ayanna Pressley [of Massachusetts] threw a little shade at Nancy Pelosi in that so-called press conference.”

Conway also asserted that too many people in the mainstream media “never challenge their factual assertions and just cover anything the four of them say without scrutiny and without examination.”

Related: Cher and Leftist Hollywood Types Are Fired Up Over Trump’s Tweets [2]

Added Conway, “These four women are distinctive for one important reason I want America to know: They’re the only four Democrats to vote against any form of humanitarian aid at the border when that vote was taken two weeks ago.”

“They have no moral authority to ever talk about the border and the kids and the humanitarian crisis there. They’re the only four Democrats to vote against a Democratic package and the package that got signed into law. I was at the border on Friday, that aid is already making a difference in terms of the conditions down there.”

The “squad” of four — Reps. Ayanna Pressley (D-Mass.), Alexandria Ocasio-Cortez (D-N.Y.), Ilhan Omar (D-Minn.), and Rashida Tlaib (D-Mich.) — all spoke on Capitol Hill the other day and are adamant Trump should be impeached.

They claim the president used racist language against them, which he did not, when he tweeted over the weekend that if they don’t like this country, if they hate it so much, then they should leave and go fix other countries.

Trump ripped into the Democratic “squad” for constantly criticizing the country for everything and anything, including laws that Congress itself has put in place. At the same time, these individuals fail to address problems that they themselves are causing or exacerbating.

“So interesting to see ‘progressive’ Democrat congresswomen, who originally came from countries whose governments are a complete and total catastrophe … telling the people of the United States, the greatest and most powerful nation on earth, how our government is to be run,” Trump wrote. “Why don’t they go back and help fix the totally broken and crime-infested places from which they came?” he added.

While only one of the four — Omar [4] — was not born in the U.S., the president’s remarks were clear: What exactly have these individuals done to help this country?

House Speaker Pelosi (D-Calif.) announced a resolution [5] condemning the president for his remarks; the Democrat-led House voted in favor of it on Tuesday night.

But the squad of four is now also renewing its feud with Pelosi: They “offered a not-so-subtle warning” to the speaker the next time she “singles them out,” as Fox News [6] reported about comments the young lawmakers made to Gayle King of CBS News. “Acknowledge the fact that we are women of color,” said Tlaib to King, referencing Pelosi. “Be aware of that and what you’re doing … because some of us are getting death threats.”

Kellyanne Conway also said this to “America’s Newsroom” on the topic: “They represent a dark underbelly in this country of people who are not respecting our troops, are not giving them the resources and the respect that they deserve. They voted against the military aid, they voted against pay raises, they voted against the $700 billion, the $716 billion that this president has put forward.  They scoff at things like the V.A. Choice Act, the Whistleblower and the Accountability Act. We’re the ones helping veterans and military in this White House, [and] we’re tired of people not kneeling for the flag out of disrespect. We’re tired of some of these women palling around with terrorists.”