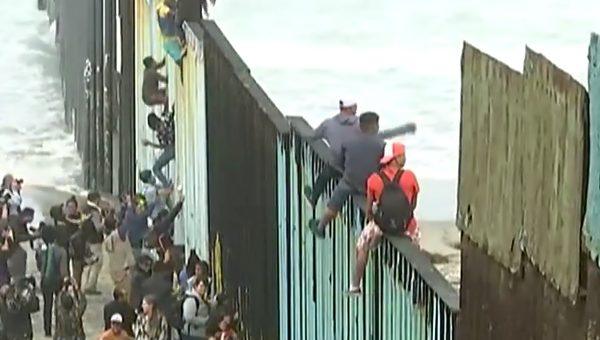 The continued border crossings of illegal aliens from Central America into the U.S. [1] will lead to hundreds of thousands of people being released into this country under “catch and release,” according to Princeton Policy Advisors. [2]

This will most likely cause a drain on our school system to the tune of 300,000 illegal students enrolled.

“We anticipate more than 700,000 migrants will successfully enter the country, increasing the unauthorized Hispanic population by nearly 10 percent,” the organization reportedly wrote in a memo.

Related: Dr. James Dobson on America’s Border Crisis: Media and Leftists Are Not Being Truthful [3]

Someone has to understand this is a drain on the American education system.

This projected increase places a huge burden on local school districts and states — many of which are already struggling to provide a good education for the children who live there legally.

Under the Obama administration, if an illegal family group couldn’t prove it lived in the district — or if a parent or guardian showed up with children to the school and didn’t have valid identification — school officials had to treat the children as homeless students.

“By year end, nearly 300,000 migrant children are expected to enter the U.S. Over time, these will show up in the U.S. public school system,” the Princeton Policy Advisors memo said, as The Washington Examiner [4] reported.

“Forecasting in the current environment is all but impossible, but at the moment it appears we are past the year’s peak and anticipate slightly lower, but still elevated, apprehensions levels going forward,” the memo noted.

“This yields 937,000 apprehensions for [fiscal year] 2019. Of these, we anticipate 538,000 will be adults traveling alone or in family units, and 354,000 will be minors. Given that we are three-quarters of the way through the fiscal year now, these numbers may be considered indicative.”

“By year end, nearly 300,000 migrant children are expected to enter the U.S. Over time, these will show up in the U.S. public school system.”

“Because apprehensions have been growing over time,” the memo continued, “forecasts for calendar year 2019 are higher than for the fiscal year. For the calendar year, we anticipate 1,040,000 apprehensions (v. 1,072,000 last month), with more than 400,000 of these children.”

But Steve Kopits, the president of the organization, said he still felt that over one million illegal aliens would be caught at the border and later released in the United States to appear at a court on a certain date — and that authorities would never see those people again.

Read more at WayneDupree.com:
He Electrocutes Himself and Saves Himself Before He Dies [6]
Epstein Victim Comes Forward, Gives Chilling Account About Being Recruited, Groomed and Raped by Billionaire [7]
Clinton Presidential Library Will Not Hand Over Information Associating Former President with Epstein [8]