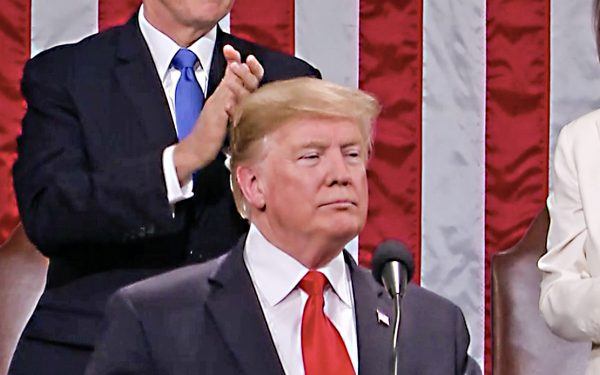 Speaking to Fox News anchor Chris Wallace of “Fox News Sunday” on Sunday morning, senior White House policy adviser Stephen Miller addressed head-on the issue of the chants of “Send her back!” [1] by members of the Trump rally audience in Greenville, North Carolina [2], this past week — and what exactly is going on in the country right now.

Miller said to Wallace, in part, “All the people in that [Greenville] audience and millions of patriotic Americans all across this country are tired of being beat up, condescended to, looked down upon, talked down to by members of Congress on the Left in Washington, D.C., and their allies in many corners of the media.”

“And let’s get specific about it,” he added. “You saw the quotes from Rep. [Ilhan] Omar [of Minnesota] saying, ‘Some people did something’ at 9/11 [4]. And yes, if you watch [her speech] in context, it’s worse. You saw the quotes from Rep. Omar talking about how, ‘Oh, well, we talk about al-Qaida in a menacing tone’ — and by the way, she’s giggling throughout this interview, ‘but we don’t talk about the Army in a menacing tone.’ And, yes, if you watch it in context, which I have, it’s even worse.”

“And perhaps the most shocking of all,” Miller added, “[are] the comments made by Rep. [Alexandria] Ocasio-Cortez [of New York] … that our border agents are running ‘concentration camps’ [on the southern border] and therefore they are Nazis [5], and therefore, everyone in that audience and you and me and everyone who supports our border patrol are, by extension, Nazis sympathizers. [She suggested that] we support Nazis if we support border agents.”

Miller went on, “One more point on that that I have to say … is that I’m Jew. As a Jew, as an American Jew, I am profoundly outraged by the comments from Ocasio-Cortez.”

“It is a historical smear. It is a sinful comment.”

“It minimizes the death of six million of my Jewish brothers and sisters,” added Miller. “It minimizes their suffering and it paints every patriotic law enforcement officer as a war criminal. And those are the comments, Chris, that we need to be focusing on.”

“As an American Jew, I am profoundly outraged by the comments from Ocasio-Cortez. It is a historical smear. It is a sinful comment,” said Miller.

When Wallace pressed him on comments made by Trump in the past about this country, Miller made a key distinction.

“Anybody who’s running for office — Right, Left, or center — always points out where they think America can do better, where they think America needs to go,” he said. “But there’s a fundamental distinction between people who think that we need to lean into and strengthen America’s core values, whether it’d be our constitutional values, the rule of law, the principles of Western civilization — or people who think it would basically need to turn America into Venezuela.”

“There’s a huge difference between ‘America first’ — and an ideology that runs down America,” Miller declared.