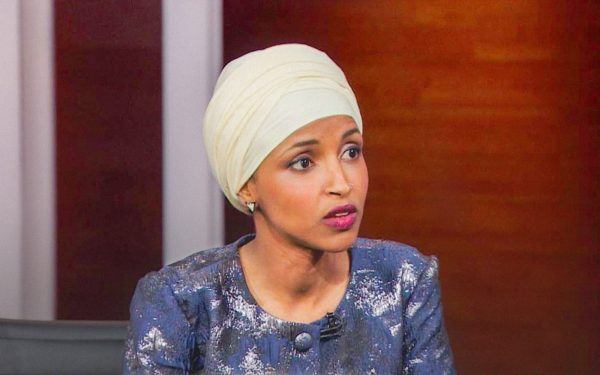 Rep. Ilhan Omar (D-Minn.), in an interview on “CBS This Morning” that aired, in part, on Wednesday, insisted she does not regret any of her past anti-Semitic remarks — implying it’s the interpretation of others that is the problem.

The Minnesota representative took part in an interview with the rest of the “squad,” a group of four Democrats — herself, Rep. Alexandria Ocasio-Cortez (D-N.Y.), Rep. Rashida Tlaib (D-Mich.), and Rep. Ayanna Pressley (D-Mass.) — who have marched in lockstep to an anti-Semitic, anti-American [1] drumbeat since assuming office as House lawmakers in January of this year.

Related: Oh, Omar! She Claims She Loves This Country More Than Those Born Here [2]

“Oftentimes there are things that you might say might not hold weight for you, but to someone else — the way that we hear and consume information is very different than how the next person might,” Omar claimed.

Interviewer Gayle King interjected, “So you don’t regret your words, either?”

“I do not,” she replied, adding, “but I have gotten the — I’m grateful for the opportunity to really learn how my words made people feel and have taken every single opportunity I’ve gotten to make sure that people understood that I apologize for it.”

Rough translation: “I’m sorry my vile comments offended anyone, but that’s on you, America.”

Omar responds: “I do not…” pic.twitter.com/1aiVasWdey [3]

King chimed in once more, giving Omar yet another opportunity to express remorse or possibly apologize. She inquired as to whether or not the lawmaker would like to make it “clear that you’re not anti-Semitic.”

“Would you like to make that clear?” King pressed.

“Yes, nothing I said, at least to me, was meant for that purpose,” Omar replied.

Again, she’s trying to say it’s those idiot Americans [6] who simply didn’t understand what she was saying.

But here are the anti-Semitic comments and actions she does not regret.

President Donald Trump responded to Omar’s consistently anti-Semitic comments by calling on her to resign from Congress [11].

President Trump on anti-Semitic Rep. Ilhan Omar (D-MN) “Her lame apology, and that’s what it was, it was lame, and she didn’t mean a word of it, was just not appropriate. I think she should resign from Congress.” pic.twitter.com/ZLFwDOttqa [12]

Instead, Democrats and Pelosi have rushed to this lawmaker’s defense time and again [14]. The speaker has become an enabler of Omar, much to the detriment of the rest of Congress and America.

Furthermore, Pelosi actually provided the blueprint that Omar used in refusing to accept regret for her comments.

“I think she has a different experience in the use of words, doesn’t understand that some of them are fraught with meaning, that she didn’t realize,” Pelosi claimed during a recent press conference.

That’s exactly what Omar repeated in this latest interview: She doesn’t understand her words and how they might be interpreted. As long as the Democrat Party continues to prop her up and provide her with excuses, Omar will never apologize or express remorse.

This piece originally appeared in The Political Insider [15] and is used by permission.

Read more at ThePoliticalInsider.com:
Bill and Hillary Clinton Booed at Billy Joel Concert [16]
U.S. Women’s Soccer Goalie Rips Christian Player, Says She Was Cut for Being Intolerant [17]
Lindsey Graham: AOC and Her Squad Are a Bunch of Anti-American Communists [18]