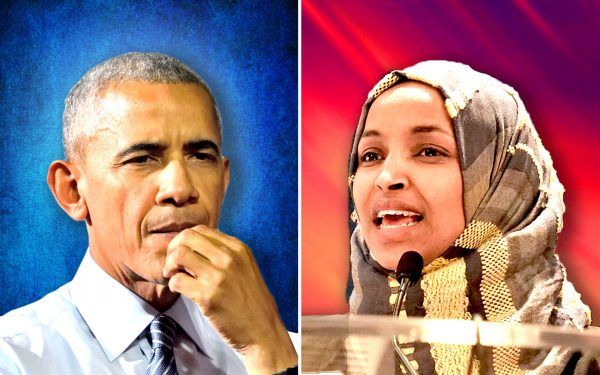 Rep. Ilhan Omar (D-Minn.) (shown above right, beside former President Barack Obama) is running the gambit as she tries to seek support from anywhere and everywhere.

Along with ripping U.S. relations with Israel and claiming our country is doing it “for the Benjamins,” Omar has made some incendiary claims against the United States — which have angered many Americans.

In the last couple of months, Omar has called for Immigration and Customs Enforcement (ICE) and the U.S. Department of Homeland Security (DHS) to be shut down.

This latest move of slamming law enforcement under the umbrella of “police brutality” should have been seen on the horizon, too, in my view.

“This is not justice. In order to address the systematic and institutionalized racism in our country, we must confront police brutality and hold those who perpetrate it accountable,” said the progressive lawmaker the other day.

This is not justice. In order to address the systematic and institutionalized racism in our country we must confront police brutality and hold those who perpetrate it accountable.https://t.co/GmAqvJoIsE [2]

The so-called Democratic “squad” members finally got around to showing their anti-local police agenda.

This attitude fits in with those who invariably target local police — to push all municipal police into a centralized command.

Related: Patriotic Americans ‘Are Tired’ of Being ‘Talked Down To’ by Leftists in Congress and the Media [4]

Omar’s tweet linked to a podcast by The New York Times, which referred to the Eric Garner case. Garner died after struggling with the New York City police back in 2014.

Earlier this week, the Justice Department announced it would not bring federal civil rights charges against one of the police officers who carried out the arrest.

I guess it hasn’t penetrated her wall of ideological emptiness that she is stoking the fires of racism with every derogatory comment about this nation she makes.

These days, I thank the police for all they do for us.

She is blinded — and her focus on everything wrong about America ensures a 2020 victory for Republicans, in my opinion.

These days, I have taken to stopping when I see the police, parking my car out in front of them where they can see me, getting out of the car and walking back to them with my hands out where they can see them, stopping 20 feet away — and asking permission to come nearer.

When I get close enough to them, I thank them for all they do. I tell them we are praying for them, urge them to be safe, and then tell them that when it comes to the choice between them and the alleged criminal — we would prefer they go home safely to their families.

Read more at WayneDupree.com:
Steve Harvey Talks About Hate from Blacks on Social Media When He Met with Trump to Make a Change [6]
Trump SLAPS Down Omar’s Threat of Being His Nightmare: ‘She’s Lucky to Be Where She Is’ [7]
YouGov Poll Claims Michelle Obama ‘Most Admired in the World’ [8]