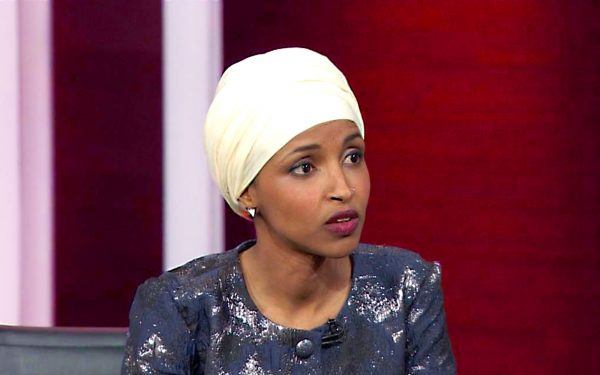 Rep. Ilhan Omar (D-Minn.) loves our country so much, she wants to change it into something it never was.

During a Netroots Nation conference held in Philadelphia the other day, Omar told the audience she believes she loves this country more than those who were born here.

Said Omar, “There is something I get criticized for all the time. It is that I am anti-American because I criticize the United States.”

“I believe, as an immigrant, I probably love this country more than anyone that is naturally born,” she added.

Where else could she be glorified for being an anti-Semitic, in my view?

Here, in this great country, Democrats praise her as brave and bold and new as she demonstrates a centuries-old anti-Semitism that merely receives a yawn in the Middle East, Africa, and Europe.

When you enter a country and can only criticize it because it doesn’t match up to your fantasies, you better step back and regroup.

Related: Conservative Americans on Ocasio-Cortez: ‘The Child Gives Me a Headache’ [1]

I don’t know what people told you, Rep. Omar, but America is the land of opportunity — not handouts.

It is supposed to be a land where you can stride free without the government breathing down your neck or trying to buy your vote.

That is why President Donald Trump and others are telling you to get lost.

You don’t know what America seeks to be.

You can only kick and scream like a brat over what it isn’t, in my opinion.

This is what Omar will never understand about American-born patriots. We fought to make this a country.

We fought off foreign invaders to keep it a country.

We fought a civil war to hold it together as a country.

We rose to the occasion as a country to help defeat the Axis Powers.

You don’t know what America seeks to be.

And since then, we have been given the duty of a kind of world police.

On the other hand, she abandoned her country!

President Trump made a good point in his messages. Fix your own house before criticizing someone else’s.

A version of this piece originally appeared in WayneDupree.com [3] and is used by permission.

Read more at WayneDupree.com:
Married AZ Teacher Gets 20 Years in Prison for Molesting 13-Year-Old Student [4]
Former ICE Director Homan Silenced AOC on Family Separations, Then Made Her Stutter [5]
Russian Bots Are Attacking Me Just Like They Started the Colin Kaepernick Controversy [6]