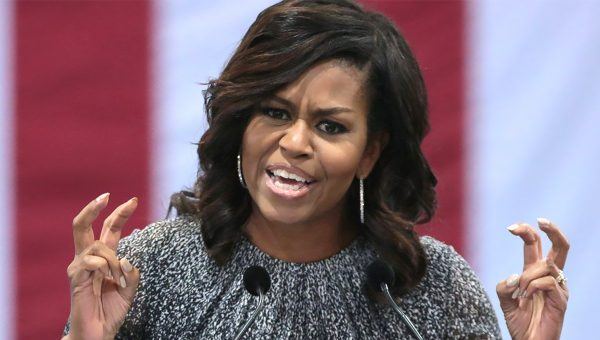 An outfit called YouGov.com released a poll that will be controversial, especially among more than half of America.

The poll claims the group surveyed over 42,000 people in 41 countries — and concluded that Michelle Obama is the “most admired” woman in the world.

This is an individual who has said she’s never been proud to be an American.

Related: Michelle Obama Whines She Was One of Few People of Color to Have to Endure Trump’s Inauguration [1]

I disagree and have always loved America — even as the previous administration severely compromised it, in my view.

Comedian Ellen DeGeneres was number 15, while first lady Melania Trump [2] came in at 19 out of 20 names, according to this poll. [3]

The poll also presents results by country — so within the United States, the most popular women in the U.S. after Michelle Obama are Ruth Bader Ginsburg, Melania Trump. Ellen DeGeneres and Queen Elizabeth II.

To my mind, Michelle Obama certainly didn’t “admire” America. She agreed with her husband when he favored Muslims and gave millions of American tax dollars to Hamas.

Yep, I guess there’s a lot to admire — and those who do have forgotten what went down with that administration.

Here’s the list of world’s “most admired men” for 2019 from the same poll and same group:

As with every poll [4], one must dive into the methodology, the timing, the context [3].

For what reason is Michelle Obama the “most admired” in the world? What has she accomplished to deserve such a position?

Related: Obama Believes Trump’s Election Was an Insult to His Legacy [5]

Every day it becomes more evident that the leftwing media are no longer merely a megaphone for liberals in Washington, New York, and Los Angeles.

They are now leading the radical alt-Left — and using their platform to push an anti-America agenda.

They are the real enemy of America.

A version of this article originally appeared in WayneDupree.com [6] and is used by permission.

Read more at WayneDupree.com:
AOC Has A Challenger; You Deserve Someone Fighting for You [7]
Steve Harvey Talks About Hate from Blacks on Social Media When He Met with Trump to Make a Change [8]
AOC: I Didn’t Say Pelosi Was Being Disrespectful to Women of Color; I Just Found Some Comments Disrespectful [9]