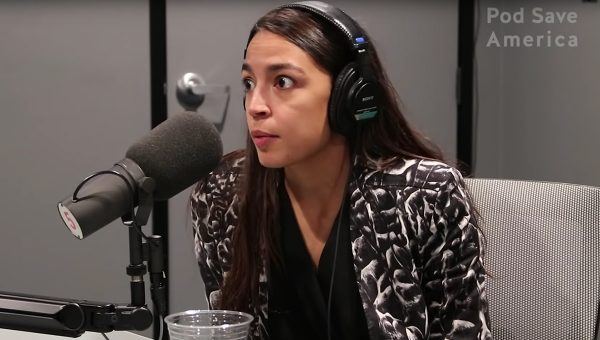 Tom Homan, the former acting director of Immigration and Customs Enforcement (ICE), appeared on “Fox & Friends Weekend” on Saturday [1] to discuss his clashes with congressional lawmakers at the end of this week [2] — and he essentially let it rip.

He shared his reaction to the questioning he faced about illegal immigrant crossings into this country [3] at the southern border — and the resulting family separations when unlawful aliens try coming into the U.S. with minors.

“It was quite pathetic that I’m sitting there in a room of lawmakers that don’t know the law,” he said. “I mean, yeah, you had [Rep. Alexandria Ocasio-Cortez (D-N.Y.)], [and] she obviously didn’t know — You know, I had to take her to school. Entering the country illegally is a crime, which she obviously didn’t understand.”

“The other congressman,” he added, “[Rep. Rashida] Tlaib [of Michigan] — she didn’t want to use the word ‘illegal alien.’ I had to explain to her, well, it’s [the] Indian Immigration Nationality Act. You know, it’s in Title VIII United States code. These are laws enacted by Congress. So if you don’t know the law — I mean, I’m sitting in a room full of lawmakers. They don’t know the subject. I forgot more about this issue more than anybody there would ever know.”

“And it was just really sad and pathetic,” Homan also said, “that these people … think they know what they’re talking about and they don’t. Again, it’s all [about the Democrats] pushing a false narrative and, ‘Let’s try our hardest to stay away from the facts.’”

He also commented on the protests by Democratic lawmakers against the expected ICE raids this Sunday [4].

“When they don’t like a decision that comes from a federal judge, all of a sudden they throw the law out the window. You’ve got representatives in Congress, lawmakers, telling people to evade the law. It’s disgusting. I mean, can’t [House Speaker] Nancy Pelosi be impeached for that? You can’t tell the American people to ignore the law.”

The hosts also asked him if such protests would make the job more dangerous for ICE enforcement officers.

“Absolutely,” he said. “Their jobs are already dangerous. These men and women put themselves in harm’s way every day. But yes, when they [the Democrat protesters] stir up the rhetoric and they stir up the hate, it’s going to make [the] job [of ICE officials] more difficult.”

He said he “prays” that “these people [ICE employees] all go home to their families that night.”

He noted that ICE has already given these illegal immigrants facing deportation “an opportunity to turn themselves in after they lost their case and they refused to do it. So ICE has to go seek them out because if they don’t, then there is no integrity in the entire system.”

“The American people need to hear the truth and push back on this false narrative [that’s] being [advanced] by the Democrats.”

He also noted that some Democrats during the hearing “did not want [the] American people to hear the truth. I think a dozen times during that hearing, when I tried to talk and people were shutting me down, I said, ‘This has nothing to do with transparency. You don’t want the truth, you don’t want to be transparent to the American people. You want to get your false narrative and talking points out and shut me down.”

Related: ‘Is AOC Working for the Cartels or the American People?’ [8]

Homan also said, “As you can see, about halfway through that hearing I had [had] it.”

“I wasn’t going to shut up. I wasn’t going to be silenced, so I went at it and I’m glad I did. The American people need to hear the truth and push back on this false narrative [that’s] being [advanced] by the Democrats.”