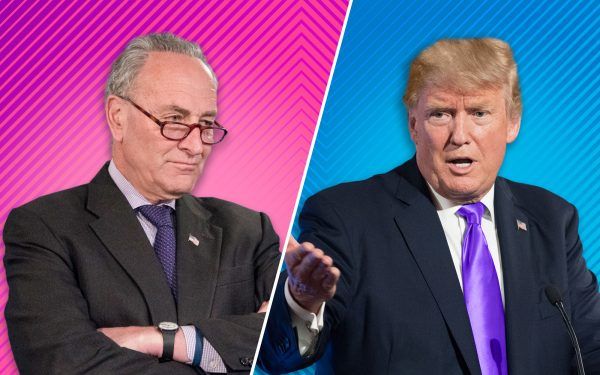 President Donald Trump responded Tuesday to Senate Minority Leader Chuck Schumer, who publicly said that the commander-in-chief was bluffing and would not impose tariffs on goods from Mexico [1].

“Can you imagine Cryin’ Chuck Schumer saying out loud, for all to hear, that I am bluffing with respect to putting tariffs on Mexico. What a creep,” Trump tweeted.

He added he was not bluffing on the threat.

Can you imagine Cryin’ Chuck Schumer saying out loud, for all to hear, that I am bluffing with respect to putting Tariffs on Mexico. What a Creep. He would rather have our Country fail with drugs & Immigration than give Republicans a win. But he gave Mexico bad advice, no bluff!

On Tuesday, Schumer addressed the proposed Mexico tariffs [3] on the Senate floor: “Frankly, I don’t believe that President Trump will actually go through with the tariffs. President Trump has a habit of talking tough and then retreating, because his policies often can’t be implemented or don’t make sense … so I wouldn’t be surprised at all if President Trump doesn’t follow through on these tariffs, either.”

Just a few days ago, Trump announced that if Mexico is unwilling to stop a majority of illegal immigrants from flowing through its country and passing over the United States-Mexico border, he will impose a 5 percent tariff on all goods from that country.

….at which time the Tariffs will be removed. Details from the White House to follow.

The White House released a statement claiming that Trump would exercise his executive powers in the International Emergency Economic Powers Act, and all companies that relocate to the U.S. will not have to pay the tariffs.

“As president of the United States, my highest duty is the defense of the country and its citizens,” said Trump.

“A nation without borders is not a nation at all. I will not stand by and allow our sovereignty to be eroded, our laws to be trampled, or our borders to be disrespected anymore”

We find it disturbing that Sen. Mitch McConnell (R-Ky.) and other Republicans can tell Trump that they are against the tariffs with Mexico, but they cannot stand with the president when he’s attacked verbally by the opposition media and the Democratic Party.

Sen. Mitch McConnell: "There is not much support in my conference for tariffs, that's for sure." pic.twitter.com/qoa2PkdNcn [5]

The Senate, House, and past presidents did nothing to fix illegal immigration; now that we have a president who is trying to solve this problem, both political parties are being obstructionist toward fixing it.

Congress refuses to fulfill its duties. Presidents have been using tariffs as a tool when needed for centuries. Barack Obama taxed import tires 30 percent not that long ago.

Congress needs to protect our borders and put forth proper immigration reform. It should also follow the laws it put in place first, starting with the need for sanctuary cities to follow the law.

Those in Congress are going to find themselves fired in a couple of years.

And they will deserve it.

Read more at ThePoliticalInsider.com:
Former Democrat Congressional Candidate Says She Hates White People and America [8]
Mitt Romney PRAISES Trump’s Republican Challenger [9]
Glenn Beck Wants Amash to Run in 2024: ‘Is The Man We on the Right Have Waited for My Whole Life’ [10]