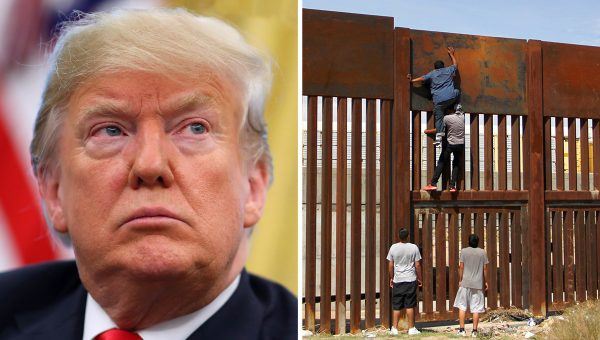 The president made a dramatic announcement on Friday night related to the war on illegal immigration and the ongoing crisis at the southern border [1].

“I am pleased to inform you,” he wrote in two related tweets at 8:31 p.m. on Friday night, “that the United States of America has reached a signed agreement with Mexico.”

“The tariffs scheduled to be implemented by the U.S. on Monday, against Mexico, are hereby indefinitely suspended,” he continued.

“Mexico, in turn, has agreed to take strong measures to stem the tide of migration through Mexico, and to our southern border. This is being done to greatly reduce, or eliminate, illegal immigration coming from Mexico and into the United States.”

“Details of the agreement will be released shortly by the State Department,” he added.

As Fox News’ Tucker Carlson noted during his evening program on Friday, just as Trump shared his message, “The news moves fast … Remarkable.”

I am pleased to inform you that The United States of America has reached a signed agreement with Mexico. The Tariffs scheduled to be implemented by the U.S. on Monday, against Mexico, are hereby indefinitely suspended. Mexico, in turn, has agreed to take strong measures to….

The president had announced last week that starting June 10, the U.S. would impose a 5 percent tariff on Mexico — and that it would increase over time until illegal immigrants stopped crossing [3] into our country.

Earlier this week, Fox News’ Laura Ingraham, host of “The Ingraham Angle,” asked the president during an exclusive interview about the tariffs [4] — and what Mexico needed to do to “stem” the “massive tide” of illegal immigrants flowing across our border — “140,000 people in May” alone.

“When you’re the piggy bank that everybody steals and robs from, and they deceive you, like they’ve been doing for 25 years, tariffs are a beautiful thing,” replied Trump. “It’s a beautiful word if you know how to use them properly. Republicans should love what I’m doing because I view tariffs in two phases. Number one, it’s great to negotiate with, because people don’t want to be tariffed for coming into the United States. They don’t want that. And number two, frankly they’re going to make a fortune because all the companies are going to move back into the country.”

“But isn’t that Congress’ fault for not passing asylum reform?” Ingraham pressed him.

“Why does it seem like Mexico is bearing the brunt?”

“They [Mexico] are letting millions of people walk up through their country,” said the president, “and they shouldn’t let anybody walk up through their country. I mean, frankly, we shouldn’t even have to have border patrol. Border patrol’s doing incredibly, you know they apprehended over 100,000 people last [month] … And by the way that [the 140,000 in May] is not even close to our record, because if you go back 13-14 years ago, it was crazy numbers, but I don’t want this. I want people to come in legally,” added Trump.

“We want the people that we want and I want a merit-based system, but we shouldn’t have anybody,” he continued. “They shouldn’t be able to walk through Mexico. And now I’ve told Mexico, ‘If you don’t stop this onslaught, this invasion’ — people get angry when I use the word invasion, people like Nancy Pelosi that honestly don’t know what the hell they’re talking about. I watched her. She was saying we have to protect Mexico. We have to take care of Mexico. Look, I’m dealing with Mexico right now. They send in $500 billion worth of drugs, they kill 100,000 people, they ruin a million families every year. If you look at that, that’s really an invasion without the guns.”

See these tweets — and share your thoughts on the latest developments.

Don’t let it go unnoticed that ⁦@realDonaldTrump [5]⁩ got this done with NO help from the GOP Senate who threatened to abandon him instead of stand strong as @potus [6] suspends tariffs on Mexico after deal on immigration reached – Reuters https://t.co/DudkpXZoSP [7]

The tariffs don’t go into effect and Mexico devotes more resources to stopping illegal immigration. Why isn’t that a win?