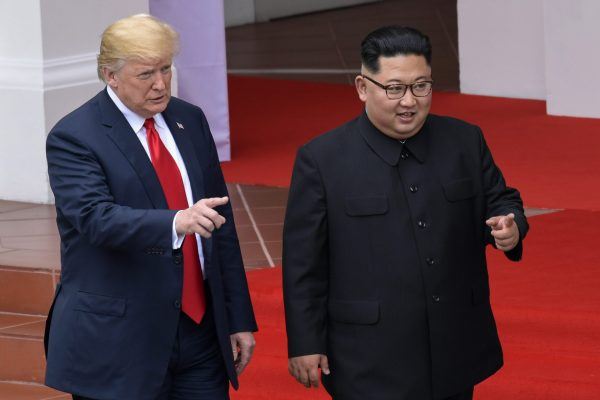 President Donald Trump on Sunday became the first sitting American president to set foot inside the country of North Korea.

Trump shook hands with North Korean leader Kim Jong-un as he “crossed the low stone curb separating the North and the South at about 3:45 p.m. local time,” as Fox News [1] and other outlets noted.

Donald Trump became the first sitting US president to set foot in North Korea after he crossed the demarcation line at the DMZ to shake hands with Kim Jong-un on Sunday. https://t.co/wG8r2HUBDj [2]

Leaving South Korea after a wonderful meeting with Chairman Kim Jong Un. Stood on the soil of North Korea, an important statement for all, and a great honor!

Liberals once believed that it was a sign of strength for a president to go to extraordinary lengths for peace. President Trump did this today in North Korea. Historic, regardless of the outcome.

JUST IN: Trump invites Kim to come to US "when time is right" after crossing into North Korea https://t.co/wVFqxBWl0z [10] pic.twitter.com/iqnXkqvYPU [11]

Huge congratulations to President Trump on meeting Kim Jong-un at the DMZ, he is a far better leader than many thought. https://t.co/r5dw7gapeJ [13]

This was their first meeting since February, after talks broke down during a summit held in Vietnam.

Before that, the two met in Singapore last June.

Trump told reporters after the meeting this weekend that the two leaders had agreed to revive talks on North Korea’s nuclear program.

“Speed is not the object” in trying to reach a deal, he said, but noted he believes both sides “want to get the job done.”

“We’re looking to get it right.”

Sanctions are still currently in place against North Korea.

The U.S. has said North Korea must submit to “complete, verifiable and irreversible denuclearization” before those sanctions can be lifted.