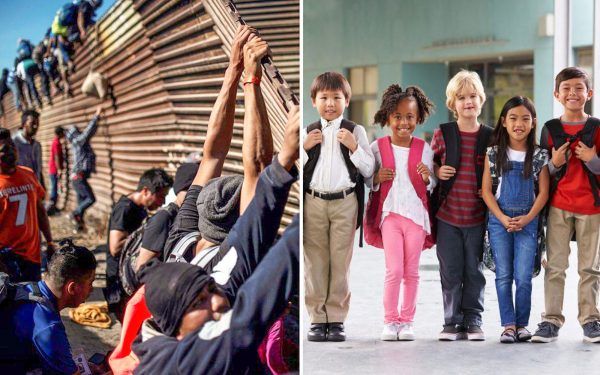 Texas high school teacher Georgia Clark, who worked at the Fort Worth Independent School District for over 20 years, was fired by the board after posting tweets asking President Donald Trump to remove illegal immigrants [1] from her school.

Eight board members voted unanimously this week to terminate her contract.

The tweets created controversy [2] at her school — which reportedly consists of a student body that is one third Hispanic.

“Mr. President, Fort Worth Independent School District is loaded with illegal students from Mexico,” she wrote in a since-deleted post. “Carter-Riverside High School has been taken over by them.”

“Anything you can do to remove the illegals from Fort Worth would be greatly appreciated,” she added.

In another post, she presciently noted that “Texas will not protect whistleblowers” and “the Mexicans refuse to honor our flag.”

The Washington Post: Georgia Clark says she didn’t mean for everyone to see her thoughts and requests on immigration. She says she believed the tweets were private between her and the president. https://t.co/h4lIJGuwws [3]

Board’s response. “This board has a strong record of supporting students and their quest for success, college, career and community leadership,” Superintendent Kent Scribner said. “Fort Worth serves 86,000 students, and it is our goal that we treat each one with dignity and respect, and based on the information that we have, we think this is the most responsible recommendation at this time.”

The teacher was not present at the meeting, according to the Fort Worth Star-Telegram [8], and nobody spoke in support of her during the public commentary period.

A school district review indicates Clark was being investigated for separate remarks, but the board’s vote was a clear-cut response to these social media posts. Clark allegedly thought her tweets were private. She has two weeks to appeal the decision and receive a due process hearing. Until then, she remains on leave with pay.

Illegal immigration in Texas. In the offending tweets, Clark noted that the school has seen a rise in drug activity as illegal aliens continue to enter the country.

Texas, in general, has seen its fair share of other problems due to illegals entering the state.

In May, reports surfaced that illegals were being flown to California as a means of relieving overcrowding [10] in the Rio Grande Valley.

Also, last month, an illegal immigrant from Kenya was charged with smothering and killing [11] a dozen women ranging in age from 76 to 94 in the state of Texas.

While it remains to be seen what other problems their investigation uncovered, the fact that this school board voted specifically on these tweets, siding with illegal immigrants over the teacher, is troubling.

Read more at ThePoliticalInsider.com:
Former Democrat Congressional Candidate Says She Hates White People and America [13]
Mitt Romney PRAISES Trump’s Republican Challenger [14]
Glenn Beck Wants Amash to Run in 2024: ‘Is The Man We on the Right Have Waited for My Whole Life’ [15]