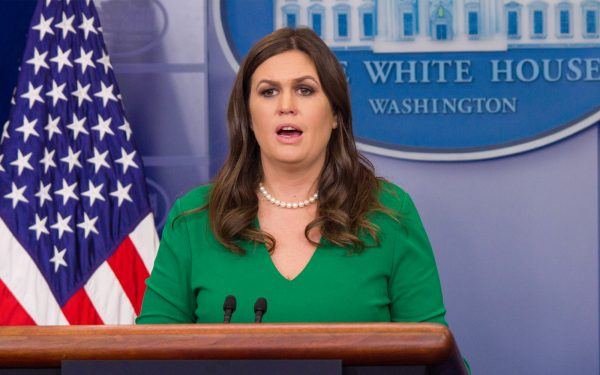 Update: On Tuesday morning, June 25, 2019, first lady Melania Trump announced that her senior staffer, Stephanie Grisham, would become the next White House press secretary, replacing Sarah Sanders, who is stepping down at the end of this month.

I am pleased to announce @StephGrisham45 [1] will be the next @PressSec [2] & Comms Director! She has been with us since 2015 – @potus [3] & I can think of no better person to serve the Administration & our country. Excited to have Stephanie working for both sides of the @WhiteHouse [4]. #BeBest [5]

Below is the original LifeZette article about Sarah Sanders’ decision to leave her role.

White House press secretary Sarah Huckabee Sanders is going to be leaving her position at the end of the month, President Donald Trump announced on Thursday.

Trump said Sanders will return to her home state of Arkansas — and added that he hopes she decides to run for governor.

Trump did not immediately name a replacement for the role.

Sanders has served as press secretary since July of 2017, when she took over for Sean Spicer.

Before that, she was part of the 2016 Trump campaign communications team.

She is the daughter of former Arkansas Gov. Mike Huckabee.

She is married and has three children.

Sarah Sanders has been a gladiator for the cause against the daily attacks from the mainstream media.

Thank you @PressSec [2] for your service to America and @realDonaldTrump [7]!

Sarah Sanders says serving as @realDonaldTrump [7]'s press secretary has been one of the greatest honors of her life.

She fights back tears.

"I couldn't have asked for a better job." pic.twitter.com/6iODnvNSzx [11]

“She’s going to be going to back to Arkansas,” the president said on Thursday during a news conference, among other remarks — calling her a “special person, a very, very fine woman … She has such heart. Great, great heart,” he said.

“This has been the opportunity of a lifetime,” Sanders said on Thursday after Trump called her to the podium during an event connected to criminal justice reform.

“He [Trump] has accomplished so much in these two-and-a-half years,” she added.

She also said the president “has been surrounded by some of the most talented and incredible people you could ever imagine.”

See the president’s tweets — as well as one from Sarah Sanders — below on this subject.

After 3 1/2 years, our wonderful Sarah Huckabee Sanders will be leaving the White House at the end of the month and going home to the Great State of Arkansas….

I am blessed and forever grateful to @realDonaldTrump [7] for the opportunity to serve and proud of everything he’s accomplished. I love the President and my job. The most important job I’ll ever have is being a mom to my kids and it’s time for us to go home. Thank you Mr. President! https://t.co/wHNnq06AMg [14]

And see this video: