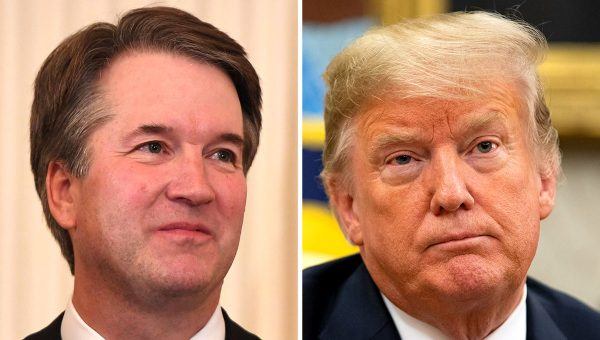 Those comments continue to be discussed and debated.

Here’s why, in part. During her remarks, Ginsburg took the time to compliment newest justice Brett M. Kavanaugh — arguably one of the most controversial justices to sit on the Supreme Court in recent times.

Kavanaugh joined the high court in the first week of October 2018 after a bruising confirmation battle.

At the 11th hour, a woman from California, Dr. Christine Blasey Ford, alleged that Kavanaugh committed sexual misconduct against her more than 35 years ago, when the two were young high school students in the Washington, D.C., area.

Kavanaugh immediately and consistently denied the charges, as well as other charges that were made against him.

Ford testified in late September during live televised hearings [2] that riveted much of the nation.

As a result of those charges, Kavanaugh’s original confirmation vote was cancelled, new hearings were held — and ultimately the Senate Judiciary Committee found no corroborating evidence to support the salacious charges.

“Justice Kavanaugh made history by bringing on board an all-female law clerk crew,” she said. “Thanks to his selections, the Court has this Term, for the first time ever, more women than men serving as law clerks.”

She continued, “Women did not fare nearly as well as advocates. Only about 21 percent of the attorneys presenting oral argument this Term were female; of the 34 attorneys who appeared more than once, only six were women.”

Kavanaugh replaced Justice Anthony Kennedy, who retired last summer. Ginsburg said that was the biggest factor for the court right now “and perhaps many terms ahead.”

She also suggested on Friday that the court is deeply divided over its most-watched cases — and hinted that a series of 5-4 decisions are likely as the court nears the end of its current term, as The Daily Signal [4] and others pointed out.

Ginsburg said it was unlikely the high court would achieve consensus on several high-profile matters.

Read more about this story in the tweets below — and share your thoughts.

Do you think the Democrats will apologize to Brett?