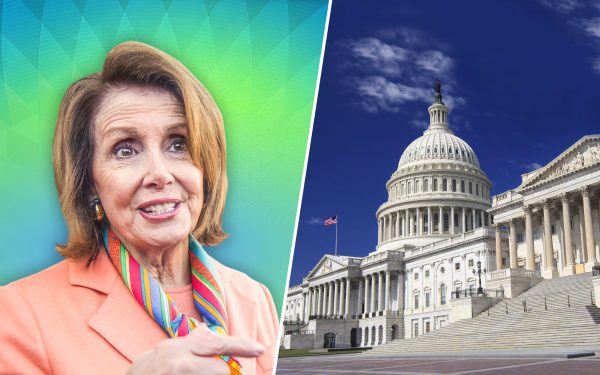 House Speaker Nancy Pelosi (D-Calif.) finally chimed in on the two-day-old controversy involving Rep. Alexandria Ocasio-Cortez (D-N.Y.) and her trivialization of the Holocaust — not by condemning the shameful comments, but by attacking Republicans for exploiting them.

Pelosi, who in our view has been notoriously slow to address anti-Semitism or other reprimandable comments [1] within the freshman Democrat class, warned her colleagues not to say anything Republicans could pounce on.

Or, you know — don’t say anything as blatantly moronic as Ocasio-Cortez did in accusing the United States government of holding illegal immigrants in “concentration camps [2].”

Pelosi even held up President Donald Trump as an example of hypocrisy within the GOP, though the president has said nary a word denigrating America the way the resistance party does on a daily basis.

“Understand that while Republicans have no interest in holding the president accountable for his words,” she said, “they will misrepresent anything that you say, just if you have one word in a sentence they can exploit.”

Pelosi made the comments while fielding questions at a breakfast hosted by the Christian Science Monitor on Wednesday morning.

The speaker claimed she hadn’t heard what Ocasio-Cortez said about concentration camps, which is undoubtedly a lie.

Her immediate pivot to telling her caucus “writ large” to avoid making statements that can be seized upon indicates she does indeed know what is going on.

Ocasio-Cortez, in her original Instagram video, referred to holding areas for illegals who are crossing the southern border as “concentration camps” five separate times [6].

“That is exactly what they are. They are concentration camps,” she said before referencing the Holocaust-linked phrase: “Never forget.”

She has since doubled down [7] on the original comments.

“This administration has established concentration camps on the southern border of the United States for immigrants, where they are being brutalized with dehumanizing conditions and dying,” Ocasio-Cortez said hyperbolically. “This is not hyperbole.”

You can’t misrepresent something that she is blatantly saying by pointing out historical facts, as Rep. Liz Cheney (R-Wyo.) has done.

“We’ve had a long history, if you go back at people who really are left-wing zealots ignoring history, ignoring facts to pursue their causes, to try to convince people the rightness of their causes,” Cheney said during an interview [8] with Fox News’ Ed Henry.

Hey @AOC [9]… All this video shows is you incoherently yelling at a fence. By the way, your decision to equate @ICEgov [10]’s brave law enforcement officers to SS guards should be condemned by @SpeakerPelosi [11] immediately. Thank you @Liz_Cheney [12] for calling her out. https://t.co/a2skSQzxXe [13]

Cheney blasted Pelosi for being a coward and not condemning the statements.

“You see the extent to which her [AOC’s] colleagues and the people who are supposed to be leading the Democrats in the House — Speaker Pelosi, Steny Hoyer — won’t stand up and criticize what she’s saying and condemn those comments and those statements.”

This is rich. Go back a moment, if you will, and watch the Pelosi video one more time. Listen to how she initially reacts to the question about Ocasio-Cortez, praising the freshman Democrats for taking responsibility for their words.

“They come to represent their districts and their point of view,” she said of the new class of Democrats. “They take responsibility for the statements they make.”

The gall to make that kind of declaration, knowing that her entire party had a chance to condemn anti-Semitic speech months ago and backed down, is astounding.

To do so when your very own comments gave Rep. Ilhan Omar (D-Minn.) a pass on her anti-Semitism [1], letting her off the hook by not taking responsibility — is master-level chutzpah.

Well, that’s misogynistic & insulting for Pelosi to claim Ilhan Omar is too foreign (& too dumb apparently) to understand the meaning of her own words.pic.twitter.com/W98wmuZ2ts [15]

Omar has a well-documented career of bigotry, which includes references to Israel as “evil,” comparisons of Israel to Iran, repeated anti-Semitic tropes [17], and support of the BDS movement.

“I don’t think our colleague is anti-Semitic. I think she has a different experience in the use of words, doesn’t understand that some of them are fraught with meaning that she didn’t realize,” the speaker said.

She’s not going to make Ocasio-Cortez take responsibility either, even though these statements deserve a censure.

The problem isn’t that Republicans are exploiting Omar or Ocasio-Cortez’s comments. The problem is that Democrats aren’t taking their anti-American language seriously enough.

This piece originally appeared in The Political Insider [19] and is used by permission.