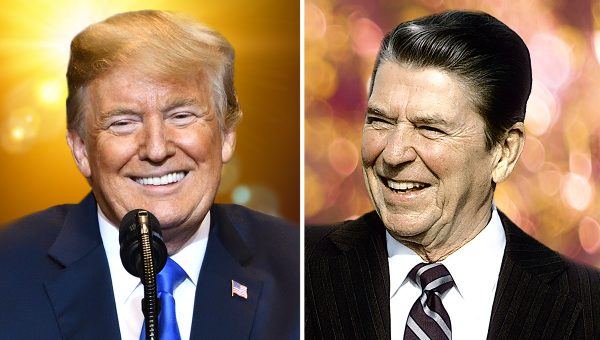 There is an old adage in show business that says one should never work with children or animals.

The obvious reason is they will always upstage you.

Let’s face it: President Donald Trump [1], like some other politicians, including Barack Obama, sometimes has had a blind spot where Reagan is concerned.

Trump recently attacked one of the Gipper’s speechwriters, Peggy Noonan, over a new piece of hers advocating censure for the president, rather than impeachment, and he angrily tweeted about “the past glory of Reagan.”

Reagan’s glories, like America’s, are not in the past. They are timeless because Reagan’s ideas are timeless — just as Reagan’s speech in 1984 commemorating the 40th anniversary of the Allied invasion of Normandy on June 6, 1944, is timeless.

Evocatively, Reagan said, “Forty summers have passed since the battle that you fought here. You were young the day you took these cliffs; some of you were hardly more than boys, with the deepest joys of life before you. Yet, you risked everything here.”

Even 35 years after he spoke those words, his message still evokes goosebumps. For Reagan, like so many others, there was good in the world and there was bad in the world.

We were good. The Nazis were evil.

We were good. The Soviet Union was evil.

For clear-thinking Americans like Reagan, good has a purpose and moral duty to oppose evil.

But Reagan, wisely, also linked up the past and the present in his Normandy speech, talking about liberated countries that later fell to communism. The Cold War was raging in 1984 and for Reagan, it was never just about the art of the speech. It was about the substance of the speech as well.

“In spite of our great efforts and successes, not all that followed the end of the war was happy or planned. Some liberated countries were lost. The great sadness of this loss echoes down to our own time in the streets of Warsaw, Prague, and East Berlin. Soviet troops that came to the center of this continent did not leave when peace came. They’re still there, uninvited, unwanted, unyielding, almost 40 years after the war.”

Coincidentally, Peggy Noonan drafted Reagan’s Pointe du Hoc speech 35 years ago. Then, she was embraced by a president for her gifts.

Now, she is being castigated by a president for her gifts. History does not always rhyme.

Trump is heading to Normandy this week to try to repeat that which has eluded everybody who has followed Reagan.

Presidential pilgrimages to Normandy have not always been part of our recent history. At the 10th anniversary, then-President Dwight Eisenhower, who led the greatest invasion in history, only issued a statement in 1954, though he did return in 1964 with Walter Cronkite and CBS News to film the documentary, “D-Day Plus 20.”

Richard Nixon was embroiled in Watergate in June of 1974 and was shortly gone from the White House, so he never ventured to Normandy.

So it was left to Reagan to remind Americans and the world what was accomplished on that gray, windswept and dangerous beach and time of Normandy 40 years earlier.

Related: Ronald Reagan’s Farewell and His Advice to America [3]

As was once said about Reagan, he could get a standing ovation in a graveyard. But for him, words communicated ideas, and it was ideas such as honor and bravery and integrity and freedom and liberty and the individual that animated this child of the Enlightenment.

And then Reagan concluded, “Strengthened by their courage, heartened by their value [valor], and borne by their memory, let us continue to stand for the ideals for which they lived and died.”

Most Americans hope so [4].

But Reagan was the first and is still the best. His speech was the gold standard by which all others have been measured — and all have come up, or will come up, short.

Craig Shirley is a presidential historian and Reagan biographer. He’s written four books on Ronald Reagan, is working on several more and is the author of the New York Times bestseller, “December 1941.” [5] His book, “Mary Ball Washington: The Untold Story of George Washington’s Mother,” is due out this November. He is the Visiting Reagan Scholar at Eureka College in Illinois and is teaching a course on Reagan at the University of Virginia this fall. For more about his work, visit his website here [6].