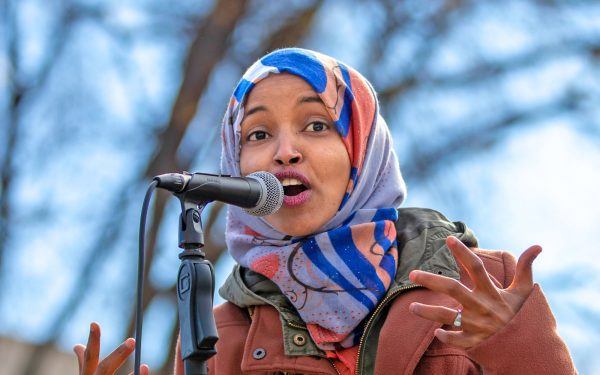 Rep. Ilhan Omar (D-Minn.) saw an opportunity in the Virginia Beach shooting on Friday [1] to call for her lawmaker buddies to shame the National Rifle Association (NRA).

The Virginia Beach shooter was a 40-year-old public utility worker who allegedly used a legally-obtained .45 handgun.

Related: Shooter Is Identified as a ‘Disgruntled’ Employee [1]

Every time there is a mass shooting, Democrats knock people down as they try to get in front of a camera, tell us we need gun control, and attack the NRA.

Never — not a single time — has any mass shooter been linked.

Omar responded to the shooting by tweeting: “I am outraged and heartbroken. How much longer will we ignore the pain of our communities? We need to immediately confront the power of the NRA and end the epidemic of gun violence in this country.”

I am outraged and heartbroken.

How much longer will we ignore the pain of our communities? We need to immediately confront the power of the NRA and end the epidemic of gun violence in this country. https://t.co/tjWCPtC7B2 [2]

“Confront” the NRA? The gunman was highly educated with no criminal history.

He purchased his weapon legally, complete with background checks.

Let’s see what his medical records reveal. Could he possibly have been doped up on overly prescribed anti-depressants, as so many mass shooters in the past have been?

Omar comes from a country riddled with crime; she might say she came here to escape that, but why bring the crime with her?

In my view, she is not worthy of representing the American people, not legally, not morally. She should be stripped of her office and citizenship and booted out of the country after having served a suitably long sentence in a common prison, not a resort.

How many of these shootings have been committed by NRA members? That would be NONE.

So how is the NRA to blame? On the other hand, how many shootings have been committed by members of the “religion of peace”? San Bernardino, the Pulse nightclub, and the Ft. Hood massacre immediately spring to mind (there are hundreds). But we don’t dare blame a whole religion for that, do we?

Yeah, blame the NRA. You might want to also blame the auto industry for all of the car fatalities that occur, and the pool makers for the occasional drownings that happen, and trans fat for all of the fatal heart attacks people suffer.

Just don’t blame the gangs and drug dealers for the inner city murders — that would be racist.

“How much longer will we ignore the pain of our communities? We need to immediately confront the power of the NRA and end the epidemic of gun violence in this country.”

The 2nd Amendment, in my opinion, is the one amendment that guarantees all others stay untouched.

Look at what’s happened to countries throughout history that gave up their right to defend themselves to a government that said, “Trust us.”

It can happen here.

Read more at WayneDupree.com:
DOJ Just Declined to Prosecute Criminal Referral by the Inspector General [6]
‘Dumb and Dumber’ Actor Jeff Daniels: I Am Ashamed to Be an American [7]
‘Game of Thrones’ Actress Says, “I’m Not Going to Work in a State That Discriminates’ [8]