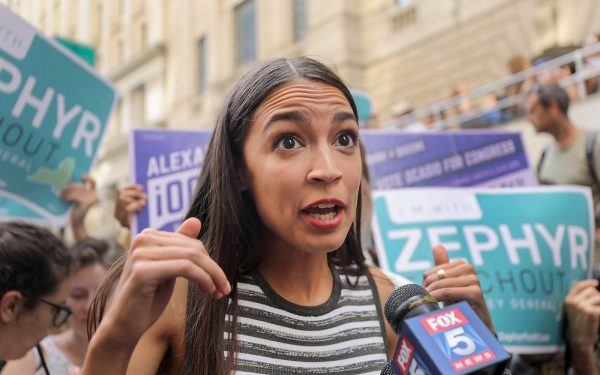 Other than its completely unrealistic, pie-in-the-sky goals, does anyone know what the Green New Deal [1] actually is?

Or how much it costs?

And how can a 28-year-old New York Democratic lawmaker expect the nation to follow her on something so big when she has only a few months of experience in office?

Related: The Green New Deal Gets a Flashing Red Light in the Senate [2]

The Green New Deal is ridiculous and impractical, in my view — and I’m surprised anyone is taking it seriously.

(Is the commotion surrounding the sweeping proposal to deal with climate change a smokescreen to take attention away from the bills that allow infanticide?)

We will not become a socialist country simply because she says so. Time for her to go, in my opinion.

“I think we really need to get to $10 trillion to have a shot,” the progressive firebrand said in response to a question from The Hill in the Capitol.

“I know it’s a ton,” she added. “I don’t think anyone wants to spend that amount of money. It’s not a fun number to say, I’m not excited to say we need to spend $10 trillion on climate, but … it’s just the fact of the scenario.”

Ocasio-Cortez, who helped popularize a set of principles known as the Green New Deal, said that of all the climate plans from the Democratic presidential candidates, she was most supportive of proposals from Gov. Jay Inslee [3](Wash.), which surpassed $5 trillion, and Sen. Elizabeth Warren [4] (Mass.), which included a $2 trillion [5] green manufacturing element.

She said she was also encouraged that 2020 Democratic frontrunner Joe Biden [6] had put out a $5 trillion climate plan, though she criticized the former vice president’s proposal for having less ambitious goals and timelines than others. (source: The Hill) [7]

Let’s say this estimate is high — and let’s round it down to $9,000,000,000,000, given that the government will be running numerous programs, agencies, departments, and more, and given that many of these will be started from the ground up.

Does anyone believe that it will only cost nine trillion?

You do the math.

Related: Here’s How AOC Plans to Pay for the Green New Deal [8]

Why don’t we start with her district?

Take the money to retrofit apartments and houses in parts of New York City — and let’s see what the reaction is there.

It is irrelevant how much it might cost because it isn’t even possible to do the things she wants. For instance, how would we get rid of all cars? Life as we know it would come to a screeching halt.

The elephant in the room is that the physics of renewable energy will neither support nor power the grid. Renewable energy only provides megawatts, not megavars, frequency, not voltage support — and that would cause the grid to collapse.

The only rational explanation I can come up with for AOC is that she is being used to ensure that no Democrats win an election for decades to come.

Read more at WayneDupree.com:
Rep. Rashida Tlaib Uses Emotional Card by Reading Alleged Threat During House Hearing [10]
MSNBC Andrea Mitchell Claims ‘America is Less Respected in Europe’ Now Than at Any Time Since WWII [11]
Napolitano: Mueller Got It Wrong When He Said Trump Can’t Be Prosecuted — Because He Can [12]