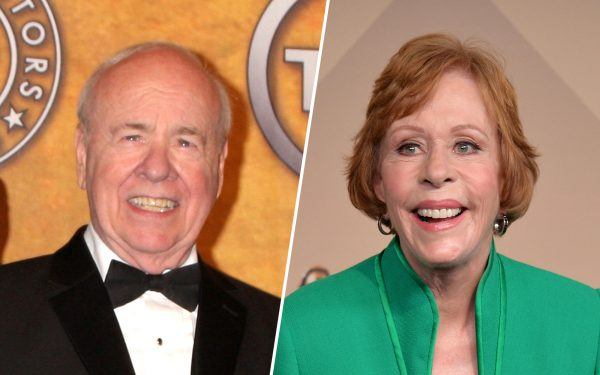 Tim Conway (shown above left, beside actress Carol Burnett) passed away on Tuesday morning in Los Angeles, California, after a long illness. Howard Bragman, his rep, shared the news with various media outlets.

Conway is survived by his wife of 35 years, his stepdaughter, his six biological children and his two granddaughters, according to Fox8.com. [1]

The longtime actor and comedian is best known for his work on the TV comedy ensemble program, “The Carol Burnett Show,” for which he won four Emmy Awards.

He was a staple of TV variety programs and comedy shows for roughly half a century.

He also won a Golden Globe Award and other accolades over the years.

His daughter, Kelly, told Fox News [3] on Tuesday that her father is “at peace now.”

“The love he gave us, and the laughter he gave the world, will never be replaced, but will be remembered forever,” Kelly told Fox News. “He is at peace now but I will miss him every second of every day until we meet again in heaven.”

Carol Burnett [4] herself, who worked closely with Conway for years, told Fox News, “I’m heartbroken. He was one in a million, not only as a brilliant comedian but as a loving human being. I cherish the times we had together both on the screen and off. He’ll be in my heart forever.”

And the Parents Television Council (PTC) [5], where Conway served on the advisory board for over two decades, shared this message on Tuesday with LifeZette: “Our hearts are heavy with the news of our dear friend Tim Conway’s passing. We are profoundly grateful for his many years of loving support for the PTC’s mission. Despite the voluminous demands on his time, he was always, always, there for us. He attended gatherings of our grassroots leaders; he wrote letters in support of our work; he autographed hundreds of copies of his memoir, ‘What’s So Funny?’ as special gifts to our members; and he entertained our benefactors with a special live performance at our headquarters,”  said the organization’s president, Tim Winter.

See the tweets below about the loss of an American great — and share your thoughts.

Sad to read of the passing of Tim Conway. Both Tim AND Harvey Korman couldn't have been any nicer AND funnier. Now together again making each other laugh. RIP pic.twitter.com/1PmgeP4tYr [10]

Tim Conway, one of Hollywood's most enduringly popular clowns, has died at 85. His goofballs, stammering bystanders and hapless bumblers populated television comedy and variety shows for more than half a century. https://t.co/llXLtbrRXP [12] pic.twitter.com/KphOLuZp16 [13]

Raise a glass to one of the funniest people who ever lived: #TimConway [15] Take a look.https://t.co/eBjjDV3VEZ [16]

BREAKING: The legendary Tim Conway has died. He brought laughter to generations of us.
Here is one of my exclusive interviews with Tim. May he rest in peace…and keep the angels laughing. https://t.co/J42B6sA340 [18]