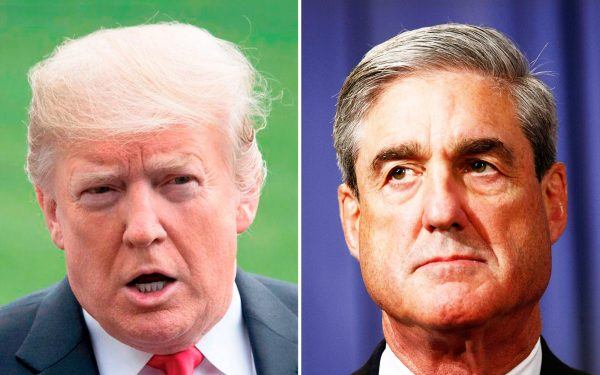 During an appearance on “Fox News Sunday,” Rep. David Cicilline (D-R.I.) told host Chris Wallace that a May 15 date has been established tentatively for special counsel Robert Mueller to show up in front of the House Judiciary Committee.

Mueller then, presumably, would respond to questions from congressional lawmakers about the findings of his nearly two-year investigation into Russian interference in the 2016 presidential election.

There’s no “absolute guarantee” Mueller will show up, the Rhode Island lawmaker declared.

But Cicilline, a member of the House Democratic leadership, also indicated he had not heard anything from Mueller’s representatives or the White House indicating the special counsel would not testify.

“We think the American people have a right to hear directly from him,” Cicilline said. “The White House has so far indicated they would not interfere with Mr. Mueller’s attempt to testify. We hope that won’t change,” he added.

But that was before President Donald Trump, tweeting on Sunday, wondered why Democrats want Mueller to testify to Congress after spending oodles of time on the investigation.

“After spending more than $35,000,000 over a two-year period, interviewing 500 people, using 18 Trump-hating angry Democrats & 49 FBI agents — all culminating in a more than 400-page report showing NO COLLUSION — why would the Democrats in Congress now need Robert Mueller to testify?” Trump wrote in a series of tweets.

“Are they looking for a redo because they hated seeing the strong NO COLLUSION conclusion? There was no crime, except on the other side (incredibly not covered in the report), and NO OBSTRUCTION. Bob Mueller should not testify. No redos for the Dems!”

….to testify. Are they looking for a redo because they hated seeing the strong NO COLLUSION conclusion? There was no crime, except on the other side (incredibly not covered in the Report), and NO OBSTRUCTION. Bob Mueller should not testify. No redos for the Dems!

In late March, Attorney General Bill Barr released the “principal conclusions” of the Mueller probe in a four-page letter to lawmakers that rocked Capitol Hill.

The summary stated definitively that Mueller did not establish evidence that Trump’s team or any Trump campaign associates had conspired with Russia to sway the results of the 2016 election — “despite multiple offers from Russian-affiliated individuals to assist the Trump campaign.”

For Trump, who had tweeted more than 230 times up to that point that he did not collude with Russians amid a slew of allegations from the mainstream media and various political figures, the moment amounted to a near-total vindication.

Although Mueller noted that his report did not “exonerate” Trump on obstruction, Barr wrote, the “report does not recommend any further indictments, nor did the special counsel obtain any sealed indictments that have yet to be made public.”

“No Collusion, No Obstruction, Complete and Total EXONERATION,” Trump wrote on Twitter after those conclusions were released.

Related: The Collusion Delusion: Look Who Said What (and Should Be Ashamed) [2]

This past Wednesday, Barr spent hours testifying before Congress about the presentation and rollout of the Mueller report — though even that did not seem enough for congressional lawmakers, who wanted him to return the next door and face grilling from staff members, which he refused to do. That brought calls from some on the Left for the attorney general to resign from his position. [3]

In regard to potential testimony from Mueller, Barr has said he has no objection to such an action.

The House Judiciary Committee chair, Rep. Jerrold Nadler (D-N.Y.), said last week the committee was “firming up the date” for Mueller’s testimony and hoped it would be May 15.

Nadler also gave Barr a Monday deadline to comply with a subpoena demanding an unredacted version of Mueller’s report, along with underlying evidence — or face a contempt charge, as Fox News [4] and other outlets noted.

“The committee is prepared to make every realistic effort to reach an accommodation with the department,” Nadler wrote to Barr.

“But if the department persists in its baseless refusal to comply with a validly issued subpoena, the committee will move to contempt proceedings and seek further legal recourse.”

1) Hillary Clinton deletes thousands of emails from a private server.
– Dems: “Nothing to see here!”

Wallace asked Cicilline on Sunday morning, “You are on the record as saying the House should be prepared to imprison people held in contempt of Congress. Are you really serious that you’re going to go down and arrest [Bill Barr], the attorney general [of the United States]?”

“Well, what I’m serious about,” the Rhode Island Democrat replied, “is the Congress has the absolute responsibility to collect evidence and to compel the presence of witnesses to testify under oath. If the executive branch can prevent us from doing that, they will have effectively extinguished our oversight function. So, we have to take this in a deadly serious way … We have several ways to enforce the subpoena. The first is to judge someone in contempt and to initiate a civil proceeding. Congress also has the inherent authority to judge people in contempt. And there is both 1821 and a 1935 Supreme Court decision that recognizes Congress’ right to that. And in both those cases, individuals were taken into custody pending their compliance with the subpoena.”

He added, “It, of course, should never come to that. We expect the attorney general to honor a subpoena when properly served, and we will fully enforce that through the courts. But the reality is, we have to have access to this information. This is central to our oversight responsibilities, and it is not up to the executive branch to decide what they want to give us. Our Constitution requires otherwise.”

Later on Sunday, after his appearance on “Fox News Sunday,” Cicilline put out a tweet indicating that the May 15 date for Mueller to appear was not yet set in stone:

Just to clarify: we are aiming to bring Mueller in on the 15th, but nothing has been agreed to yet. That’s the date the Committee has proposed, and we hope the Special Counsel will agree to it. Sorry for the confusion. https://t.co/FfR8ReLmkp [6]