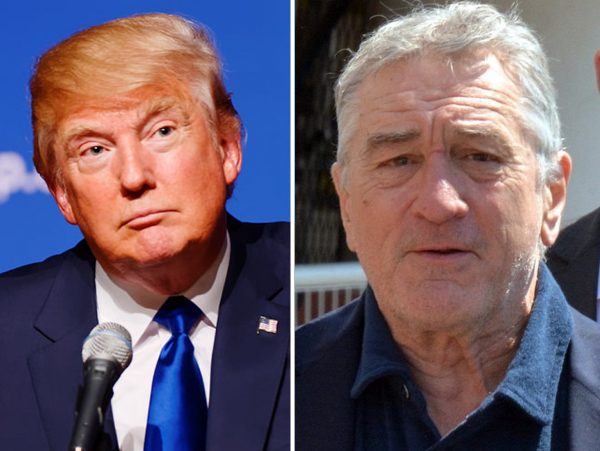 Actor Robert De Niro, speaking at the American Icon Awards [1] on Sunday, engaged in yet another “f*** Trump” rant for the crowd — but this time he was met with some boos for the effort.

While there were certainly some in the audience receptive to the attention-seeking profanity, it didn’t amount to the usual praise he’s received from adoring Hollywood liberals.

De Niro was honoring colleague Al Pacino, who was receiving an award at the event, but he interrupted that to say, “You didn’t think you were gonna get away without a f*** Trump moment, did you?”

Related: Jim Carrey May Have Gone Too Far with His Abortion Cartoon [2]

Reaction. A couple of boos rained down for his initial comment — but the crowd delivered them a little more vociferously when the Hollywood star continued his anti-Trump comments.

“The individual who currently purports to lead America is not worthy of any tribute,” said the unhinged “Focker.”

“Unless you think of his impeachment and imprisonment as a sort of tribute — now that’s how you can make America great again.”

It’s sad watching how far a once-great actor has fallen. From bit roles in bad comedies to stunts that desperately seek attention and praise from his liberal Hollywood friends, it remains a sad sight to see.

Just a few weeks ago he was pulling the same shtick, blasting the president and his “deplorable” supporters [3], tying in the First Amendment right to free speech to make his uneducated point.

“I’m happy to stand … tonight to support the First Amendment,” De Niro boasted. “The right of the president to be a relentless and unrepentant, lying scumbag, the right of his supporters to not give a s***, and our right to do something about it.”

Last June he was censored [5] at the Tony Awards for shouting “F*** Trump!” with raised arms and clenched fists as he soaked up the applause and ovation that followed.

For his part, President Donald Trump has referred to De Niro as “punchy [6],” claiming he’s taken too many shots to the head while filming boxing movies, and “a very low IQ individual,” putting him in the same category intellectually as Rep. Maxine Waters (D-Calif.).

Read more at ThePoliticalInsider.com:
Study: Democrats Lied About Mental Distress After 2016 Election to Make Trump Look Bad [8]
WATCH: Even Joe Biden’s Wife Wants Him to Keep His Hands to Himself [9]
Gillibrand Says She Wouldn’t Detain Illegals at All, Simply Release Them into the Community [10]