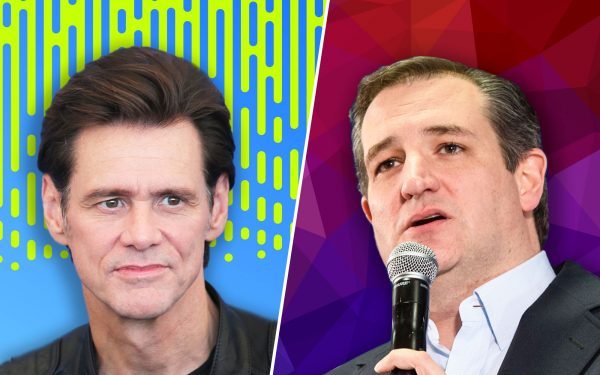 Weighing in on the state of Alabama’s recent passage of a law prohibiting abortion once a fetal heartbeat is detected (at around six weeks) [1], actor-turned-artist Jim Carrey shared a new creative work depicting — yes — the abortion of GOP Alabama Gov. Kay Ivey, who signed the measure into law [2].

It carried the message: “I think if you’re going to terminate a pregnancy, it should be done sometime before the fetus becomes Governor of Alabama.”

I think If you’re going to terminate a pregnancy, it should be done sometime before the fetus becomes Governor of Alabama. pic.twitter.com/6QgsY2rMz7 [3]

Many on the Right reacted strongly to the new piece of artwork.

Related: One Man Copes with the Wrenching Impact of His Girlfriend’s Abortion 20 Years Ago [5]

Sen. Ted Cruz (R-Texas) wrote on Twitter that Carrey’s illustration and message were “not OK” — and that today’s Left is “vicious, angry and consumed by hate.”

Instead, he urged “civility.”

See his full message below:

This is not OK. Today’s Left: vicious, angry & consumed by hate. Instead of insults & dehumanizing rage, we should return to civility. I disagree w/ Carrey’s politics, but believe we should respect his humanity nonetheless. I wish he could reciprocate. #LoveIsStrongerThanHate [6] https://t.co/vKVGZzou1q [7]

Others, however, while acknowledging the viciousness of the message, are also saying Carrey’s artwork could help the case against abortion.

See their messages below — and please weigh in on this issue.

This is a pretty great depiction of an abortion: clinically accurate, and wiping out an individual human life. https://t.co/Sy58LwDdj1 [9]

Thank you for the truly accurate (and therefore horrifying) portrayal of abortion… sucking out the brains of a PERSON because that person is inconvenient to you. You blessed the pro life movement with this.