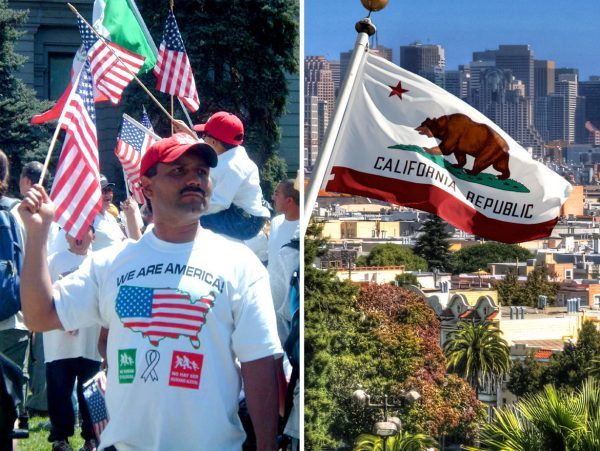 With U.S. Customs and Border Patrol (CBP) agents continuing to struggle with the large number of illegal immigrants making their way into our country, officials are now beginning to arrange flights for these migrants to other parts of the United States.

There may be as many as three flights a week to San Diego, California, Fox News [1] reported, beginning yesterday (Friday).

News outlets have begun reporting on the migrant flights.

“Flights carrying 120 to 135 people were set to begin flying on Friday to San Diego from the Rio Grande Valley in Texas and would continue to do so indefinitely, Border Patrol’s interim San Diego sector chief Douglas Harrison said,” Fox News [1] noted.

Harrison told the outlet it would be a “contingency operation” and there would be at least three flights a week making the trip.

And what is the cost to the U.S. government of each flight of migrants? That would be around $6,000, officials said.

“We don’t have an end date,” Harrison said, as Fox News also reported.

“We’ve got to give the people in Rio Grande Valley some relief,” he also said.

No unaccompanied children will be transported on these flights, officials said.

Once migrants are taken in at the border, they go through processing — their biographical information is collected and recorded. Then they go through a medical screening.

After that, they’ll be placed on flights to San Diego International Airport.

Once they arrive there, they’ll be taken to a Border Patrol Station for fingerprinting and interviews. They may also get a second medical screening.

The individuals will be properly housed; and Immigration and Customs Enforcement (ICE) will then decide whether or not to release the families into the San Diego community.

“We’re in the middle of a humanitarian crisis and the numbers in Texas are staggering, so the BP [Border Patrol] is helping out in those sectors to more efficiently process these folks,” one CBP official told Reuters [10], the outlet reported.

Officials have said they are also considering organizing similar flights of migrants to Detroit, Miami and Buffalo, N.Y.

President Donald Trump in February declared a national emergency along the southern border [11] while prominent Democrats continued to insist there was no emergency and worse, to accuse the president of making one up.

Back in February 6 of this year, House Speaker Nancy Pelosi (D-Calif.) posted a statement on her website [12] accusing the president of “manufacturing a crisis at the border.” She said, in part, “Instead of fear-mongering and manufacturing a crisis at the border, President Trump should commit to signing the bipartisan conference committee’s bill to keep government open and provide strong, smart border security solutions.”

His decision on the national emergency was met with praise and backlash — along with lawsuit threats. Trump has long fought to get funding for a border wall to protect the security of this country, but the budget battle with Congress did not end the way he had hoped. He wound up signing an eventual proposal from Congress but also declared the national emergency to secure needed funds for the wall. He signed the deal to avert a partial government shutdown; an earlier one ended on January 25.

Asked on Thursday during her weekly press briefing whether she would now acknowledge the crisis at the border, Pelosi said this [13]: “Well, let me just say this. We have never not said that there was a crisis. There is a humanitarian crisis at the border, and some of it [is] provoked by the actions taken by the administration.”

Related: Democrats Want to Deny Trump’s National Emergency, Yet They Use It for Their Own Partisan Purposes [14]

Since October 1 of last year, border arrests have jumped and reached a record 520,000, the highest in a decade, according to reports. On average, agents make around 4,500 arrests a day.

The tremendous numbers of people who need processing are making it difficult for officials to process and release family units within 20 days of their arrival at a detention center, as required by law, the CBP said in a statement, as Reuters reported.

The Rio Grande Valley currently has nearly 8,000 people in detention, according to reports.

Officials have said they are also considering organizing similar flights of migrants to Detroit, Miami and Buffalo, N.Y.