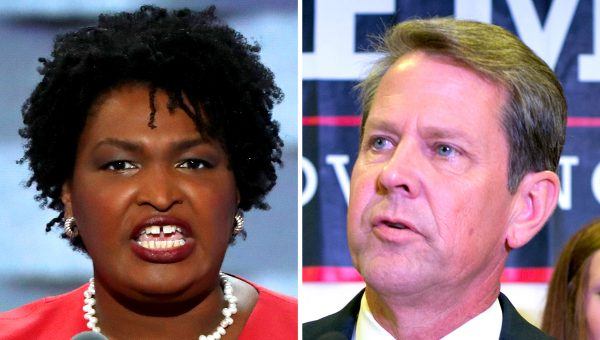 Georgia’s Republican Gov. Brian Kemp (shown above right) on Tuesday morning signed the so-called heartbeat bill into law in his state, something he campaigned on last fall when he beat Democrat challenger Stacey Abrams (above left) in a gubernatorial race that gained national attention. [1]

The new law will take effect on Jan. 1, 2020, unless opponents are able to block it in court.

The bill, HB 481, is officially known as the Living Infants Fairness and Equality (LIFE) Act. It outlaws abortions in the state after doctors are able to detect a fetal heartbeat, which can occur as early as six weeks into a pregnancy. Exceptions are permitted in the case of rape, incest, or if the mother’s life is in danger.

Georgia’s current law allows abortions to be performed up to 20 weeks.

“Before the signing of the bill, State Rep. Ed Setzler pointed to science, law, and the simple fact that common sense says a beating heart is a sign of life and those children should receive the full protection of the law. State Sen. Renee Unterman, a former nurse who ushered the bill through the state Senate, said she has waited her entire time as a legislator for this moment, calling it the ‘culmination of my political career,'” Fox News [2] reported.

“Georgia is a state that values life,” Gov. Kemp said before signing the bill into law. “We stand up for those who are unable to speak for themselves.”

“Gov. Brian Kemp is keeping his campaign promise,” Dan Celia [3], a national radio and television host and an authority on biblical stewardship, told LifeZette on Tuesday. “This is certainly a step in the right direction, and we applaud Gov. Kemp and appreciate his stand for those who are unable to take a stand.”

Celia [4] added, “Living in the state of Pennsylvania, where a state representative harassed women who were praying outside an abortion clinic, this comes as a breath of fresh air. The pro-abortion Democrats are certainly not happy with another step in a positive direction, not only for the state of Georgia but also as other states are encouraged to stand for life. We hope and pray for more action like this,” he said, “and look forward to the day that Roe v. Wade is overturned and abortion is the thing of the past.”

The Heartbeat Bill is one of the greatest peices of legislation I have ever seen pass.

This is a great win for Georgians and a start to protect unborn children all over America.

Thank you Gov Kemp! I pray the rest of America follows your lead.

Georgia’s GOP Gov. Brian Kemp signed into law a "heartbeat" bill that blocks abortions as soon as a fetal heartbeat is detected — typically at 6 weeks, before many women know they are pregnant.

It is the 4th state to implement such a law this year. pic.twitter.com/Wjvl6Fflhl [8]

The governor — noting that he’s aware opponents will challenge the bill, also said on Tuesday, “Our job is to do what is right, not what is easy … We will not back down. We will always continue to fight for life.”

Opponents have vowed to sue over the bill’s constitutionality. Many of them say that because some women don’t know they are pregnant when a heartbeat is first detected, the law virtually bans all abortions in the state.

Staci Fox, president and CEO of Planned Parenthood Southeast, declared that she had “one message for Gov. Kemp: We’ll see you in court,” as 11Alive reported.

Related: Alyssa Milano and Others Threaten to Boycott Georgia Over Heartbeat Bill [12]

Actress and activist Alyssa Milano had vowed earlier to boycott the state as a member of the film industry if the governor went through with the heartbeat bill.

“This dangerous and deeply flawed bill mimics many others which have already been deemed unconstitutional,” she and others wrote in a letter a few months ago [12]. “As men who identify as small-government conservatives, we remind you that government is never bigger than when it is inside a woman’s body or in her doctor’s office. This bill would remove the possibility of women receiving reproductive health care before most even know they are pregnant and force many women to undergo unregulated, hidden procedures at great risk to their health.”