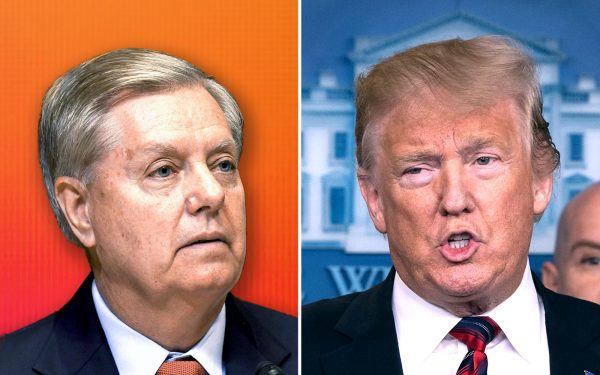 Sen. Lindsey Graham (R-S.C.), chair of the Senate Judiciary Committee, told anchor Maria Bartiromo of “Sunday Morning Futures” [1] on Fox News that he is working on declassifying a sensitive “document” that would prove definitely that authorities [2] knew the Steele dossier — used by the FBI to justify the surveillance of a former aide to then-presidential candidate Donald Trump — lacked any substantial independent corroboration.

“There’s a document that’s classified that I’m going to try to get unclassified that takes the dossier, all the pages of it, and it has verification to one side,” Graham told Bartiromo on Sunday morning.

“There really is no verification, other than media reports that were generated by reporters that received the dossier,” he said.

“So, the bottom line,” added Graham, “is the dossier has never been independently confirmed. It was used to get a warrant. They knew the author of the dossier was on the Democrat Party payroll. He hated Trump; they got the warrant anyway. Most Americans should be very upset about that. I’m very upset about it,” he said. “And we’re going to get to the bottom of it.”

“On four occasions, the FBI told the Foreign Intelligence Surveillance (FISA) court that it ‘did not believe’ former British spy Christopher Steele was the direct source for a Yahoo News article implicating former Trump aide Carter Page in Russian collusion, documents released after a lawsuit showed last year,” as Fox News [1] explained in a piece on Sunday morning.

Related: Giuliani on Fake Collusion Narrative: We Have to ‘Find Out Who Is Responsible’ [3]

The FBI instead suggested that the September 2016 article by Michael Isikoff was actually independent corroboration of the unverified allegations against Trump in the infamous Steele dossier.

Federal authorities used the Steele dossier and the Yahoo News article to convince the FISA court to produce a surveillance warrant for Page.

“But London court records show that contrary to the FBI’s assessments, Steele briefed Yahoo News and other reporters in the fall of 2016 at the direction of Fusion GPS — the opposition research firm behind the dossier,” the Fox News piece continued.

“The FISA application also copied and pasted directly from a Washington Post opinion piece that claimed the Trump campaign had ‘worked behind the scenes’ to ‘gut’ the GOP platform on Russia and Ukraine.”

It appears the FBI did no independent review of the opinion article’s disputed claims — cited widely as evidence the Trump team was compromised by Russia and working to appease Russian President Vladimir Putin.

After nearly two years of investigation, the Russia probe by special counsel Robert Mueller [4] found there was no evidence of misconduct when a single Trump official vetoed one delegate’s proposed platform change. (Read more on the issue at Fox News [1] here.)

Mueller in late March wrapped up his investigation into alleged collusion between Trump and Russian interests [4] and released his full report to Attorney General Bill Barr.

Barr then issued [5] a four-page summary to Congress, and ultimately a redacted version, showing there was no evidence Trump or his associates or campaign colluded with Russians to influence the presidential election. Mueller controversially punted on the issue of whether or not Trump obstructed justice. But Mueller did not recommend that Trump be charged for it, either.

After declaring vindication, Trump and members of his administration have said it’s now time to find out who — from the very start — was behind the investigation.

Related: Trump Jr.: ‘It Was Difficult’ to Watch ‘What They Did to My Father for Two Years’ [6]

“It has to be clear to any fair-minded person [that] the whole idea of conspiracy with the Russians, interference with the elections, collusion, if you want to call it that, is totally untrue,” said Rudy Giuliani, the president’s lawyer and former mayor of New York City, in late March. “Three investigations and not a single bit of evidence [from] every single witness who CNN said was a ‘blockbuster witness’ totally fell apart.”

Sen. Graham said on Sunday his vowed “deep dive” into the origins of the special counsel probe is pending the end of Inspector General Michael Horowitz’s own investigation into alleged FBI and DOJ misconduct during the 2016 presidential campaign.

“I’m waiting for Horowitz to get his report done,” Graham said. “But we had a pretty big bombshell this week.” He mentioned the report from The Hill’s John Solomon [7] that the FBI was clearly told that Steele had admitted to a State Department contact that he was “keen” to leak his discredited dossier to sway the outcome of the 2016 election, as Fox News [1] noted.

“There [is] now clear evidence that Steele was simply out to smear then-candidate Trump.”

“But for the dossier, there would be no warrant against Carter Page [8],” Graham told Bartiromo. “The meeting on October 11 was 10 days before the FISA warrant application. So the FBI was on notice that their confidential informant went to the Department of State to urge the Department of State to take the dossier and leak it to the public to affect the election. That’s about as sick as it gets.”

A number of GOP senators, including Graham, want answers from the State Department [9] — plus related documents.

“In a pair of missives to FBI Director Christopher Wray and Secretary of State Mike Pompeo, Sens. Ron Johnson (R-Wis.)  and Chuck Grassley (R-Iowa) said there was now clear evidence that Steele was simply out to smear then-candidate Trump,” Fox News [1] reported.

Also on Sunday morning, Graham commented to Bartiromo [10] about the new asylum legislation that will be introduced this week — and how he believes it could help fix serious immigration issues at the U.S.-Mexico border [11].

“Word is out if you bring a minor we can only hold for 20 days, we’ll release everybody — even the adults who will never show for [a] hearing because it’s three years from now,” said the GOP senator. “We also — it’s been found out in Central America [that] if you ask for asylum, nobody is trying not to get caught. They go to border agents and say they want asylum. Hearings are two, three, four years down the road; nobody ever shows up for the hearing. So we’re going to change the asylum law that you’re going to have to apply in the country where you live or Mexico. We’re going to stop Central American applications being made at the border, because we don’t have enough judges for hearing dates.”

He added, “We’re going to go to 100 days. We can hold minor children for 100 days, so that we could actually process the entire family without letting them go. We’re going to increase judges by 500 — we’ve got almost 900,000 backlogged in asylum claims. We’re going to wipe out the backlog. You’ve got to apply for asylum from where you live or in Mexico, no longer from the United States. And if you’re an unaccompanied minor, we’re going to send you back to Central America, as if you live in Mexico, which would be a change in our laws. This should stop 90 percent of the illegal immigration from Central America.”