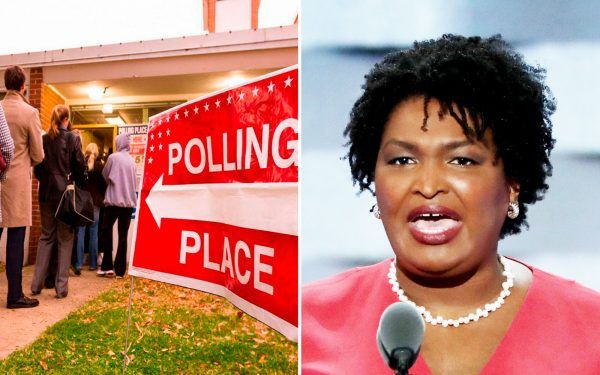 Addressing the Center for American Progress’s Ideas Conference, Abrams said, “The notion of identity politics has been peddled for the past 10 years and it’s been used as a dog whistle to say we shouldn’t pay too much attention to the voices coming into progress.”

“I would argue that identity politics is exactly who we are and exactly how we won,” she added.

Stacey Abrams: "Identity politics is exactly who we are and it's exactly how we won." https://t.co/85uq8kxTIi [2] pic.twitter.com/3U3ohfKnu3 [3]

Remember, this is the same Stacey Abrams who once said [5] it was “disturbing” and “distressing” that candidate Donald Trump might reject the results of the 2016 presidential election if it did not go his way.

It’s funny how when the other party does something, it’s horrendous — but when one’s own does it, everything is fine.

Despite losing her race by 55,000 votes [6] — not a small number in a state race — Abrams continues to insist she actually won in one form or another.

When a reporter asked her in March [7] if she ever planned to concede her election, she said “No” — which Hillary Clinton and the Democrats called a “direct threat to democracy” when speculating that Trump could do the same.

Donald Trump refused to say that he’d respect the results of this election.

That’s a direct threat to our democracy.

Abrams’ comments remind us that the Democrats are now completely beholden to identity politics. For them, what you are — your race, gender, religion — becomes more important than who you are.

Most Americans are not on board with such a radical view.

Does Abrams ever stop and think that her party’s embrace of such radicalism is the reason she lost?

Whether Stacey Abrams runs for office again is anyone’s guess, but whatever the outcome, we know she will proclaim herself the winner — over and over and over again.