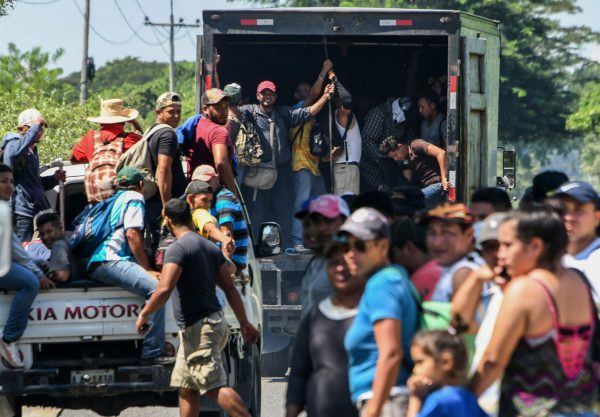 The startling accusation, which we wish could be reported as hyperbole, prompted a swift rebuke and eventually led to Underwood’s remarks being stricken from the record.

The Illinois congresswoman had already engaged in a contentious back and forth with McAleenan regarding the family separation policy for illegals at the southern border.

She referenced the allegedly poor conditions in which children are being kept and spoke of the recent death of a fifth child in custody.

Related: Illegals Are Now Being Flown to California to Relieve Crowding in Texas [3]

“At this point, with five kids that have died, 5,000 separated from their families, I feel like, and the evidence is really clear, this is intentional,” Underwood charged. “It’s a policy choice being made on purpose by this administration, and it’s cruel and inhumane.”

She immediately drew bipartisan backlash for the claim, with McAleenan [1] responding that her accusations were nothing short of “appalling.”

“That’s an appalling accusation, and our men and women fight hard to protect people in our custody every single day,” he retorted, noting that Congress, of which Underwood is a member, had failed to provide resources that DHS requested that “would have prevented this from happening.”

When given an opportunity to clarify her statement, Underwood repeated it nearly word for word.

Check out the fiery exchange below …

Rep. @LaurenUnderwood [4]: “With 5 kids that have died, 5,000 separated from their families, I feel like the evidence is really clear that this is intentional. It’s intentional, and it’s a policy choice being made on purpose by this administration.” https://t.co/C5Doo7vn96 [5] pic.twitter.com/WeNzCGOFVY [6]

Fake nurse. Underwood’s comments on the treatment and care of children are especially notable as the media continually portray her as a “nurse.”

According to the Kane County Reporter [8], however, Underwood has never actually worked as a nurse and admitted that dealing with patients “just wasn’t my interest.”

“That Underwood never actually worked as a nurse — in college or after graduation — might come as a surprise to voters in the 14th Congressional District, now familiar with the torrent of television advertisements depicting her with a stethoscope serving patients,” the report reads.

Rest assured, the media will note her credentials as a nurse when writing about this exchange.

Underwood’s comments alleging that the administration is intentionally murdering children actually eclipse those of fellow freshman Rep. Alexandria Ocasio-Cortez (D-N.Y.), who suggested that ICE is an organization [9] that “incarcerates children and sexually assaults women with impunity.”

Her colleague also accused ICE of violating human rights [2] and of even being murderers.

“That is completely inappropriate, and her words should be taken down. She was very explicit.”

For her part, Underwood was almost immediately admonished for her statements, with the committee voting to condemn [10] Underwood and striking her wild and false [11] accusations from the record.

“Mr. Chairman, you cannot impugn the character of the witness by stating that he intentionally murders children,” he said. “That is completely inappropriate, and her words should be taken down. She was very explicit.”

“Lauren Underwood’s hatred of the Republican Party has made her become unhinged. Shame on her for spreading disgusting, false smears against the men and women fighting to keep us safe,” NRCC Spokeswoman Carly Atchison said.