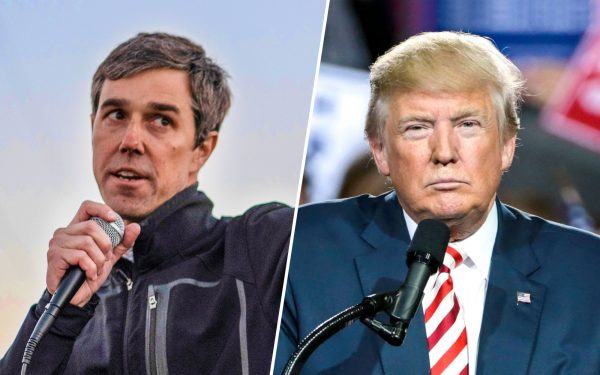 MSNBC’s Joy Reid tried to delegitimize the administration of President Donald Trump this weekend during her Saturday edition of MSNBC’s “AM Joy.”

Democrat Beto O’Rourke [1] (shown above left), former congressman in Texas and now a 2020 presidential candidate for the Democrat nomination, joined Reid for an interview.

He said he doesn’t have “complete confidence” that the Florida voting systems weren’t breached in 2016 — and concluded that Trump’s election win in 2016 wasn’t fair.

Reid brought up some narrative about Russians potentially breaching the voting systems in two Florida counties. She asked O’Rourke, “Do you have confidence that the 2016 election was not impacted in terms of, not just the use of propaganda on American voters, but literally that the electoral systems weren’t breached and that Donald Trump was elected fairly?”

O’Rourke replied, “I don’t have complete confidence — in part because of what you just shared about Florida, in part because we know from other secretaries of state in other states in the union that their systems were breached. We don’t know if vote tallies were changed, but that alone should be cause for concern.”

After reading an array of news stories today, it is pretty plain to me the Left has decided to flat-out lie about anything and everything.

However, I agree with O’Rourke but in another way. Certain elements of the U.S. government were conspiring to determine the outcome of the election for Democrat Hillary Clinton — otherwise this would have been an even more lopsided win for President Trump in November 2016.

Hillary lost in spite of having raised more money to spend than Trump and in spite of having all of the liberal media on her side. She lost even though her campaign staff was parked at the Clinton Foundation and working on her campaign eight years in advance of the start of the campaign; lost even after the DOJ, FBI and intelligence agencies worked to destroy her opponent; lost even after such people as Barack Obama, Loretta Lynch, and James Comey put in the fix on her deserved indictment for a long list of federal crimes so she could stay in the race, in my view.

Related: Obama Believes Trump’s 2016 Election Was a ‘Personal Insult’ to His Legacy [3]

Safeguards must be put in place to prevent Democrat cheating in upcoming elections.

Some snowflakes and millennials seem to thrive on the sort of shallow garbage put out by those on the Left that has nothing to do with a candidate’s policies or how he or she wants to shape America.

It is also why Rep. Alexandria Ocasio-Cortez (D-N.Y.) [4] is so popular with the Left, including with low-information voters who worship celebrity.

Read more at WayneDupree.com:
Charles Payne: I Cringe When I Hear People Insult AOC’s Intelligence [6]
Reese Witherspoon: I Am Beyond Upset at Abortion Bans, Can’t Tolerate Attacks on Women’s Rights [7]
Letterman Stews, Says He Doesn’t Like Trump as President [8]