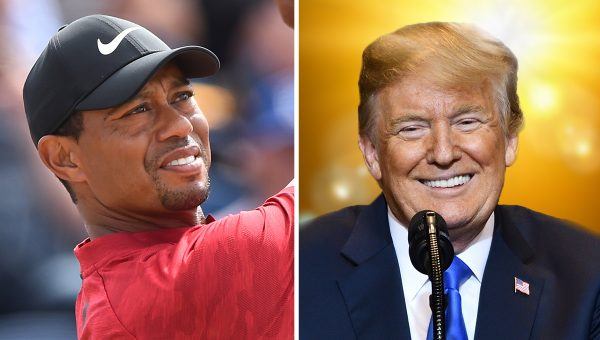 Tiger Woods, fresh off an incredible win at the Masters this weekend, will be awarded the Presidential Medal of Freedom by President Donald Trump [1].

The president made the announcement via social media, after spending the weekend periodically tweeting about Woods’ incredible performance.

Tiger Woods, arguably one of the best golfers of all time, suffered through an 11-year drought between major championships.

It was a drought that included some high-profile personal struggles and a series of difficult injuries.

That all came to an end on Sunday when he sank a short putt on the 18th gree [2]n to capture his fifth Masters.

“Love people who are great under pressure,” Trump tweeted when the victory was secured.

“What a fantastic life comeback for a really great guy!”

The president’s celebration carried into Monday, where he made an announcement that Woods might celebrate just as much as a green jacket.

Spoke to @TigerWoods [3] to congratulate him on the great victory he had in yesterday’s @TheMasters [4], & to inform him that because of his incredible Success & Comeback in Sports (Golf) and, more importantly, LIFE, I will be presenting him with the PRESIDENTIAL MEDAL OF FREEDOM!

Joins other legends. Woods will join three other golf greats who also received the Presidential Medal of Freedom, which is given to individuals “for especially meritorious contribution to … cultural or other significant public or private endeavors.”

Jack Nicklaus and Arnold Palmer were both granted the award by George W. Bush in 2004 and 2005 respectively, while Charles Sifford, the first African-American to play on the PGA Tour, was given the award by Barack Obama in 2014.

Trump has also given the medal to other athletes, including Babe Ruth, Roger Staubach, and Alan Page.

After calling @TigerWoods [3] to congratulate him on his 5th Masters victory, President Trump announced he would be awarding Woods with the Presidential Medal Of Freedom, citing his “incredible Success & Comeback in Sports.” Read more here: https://t.co/2mhaRpm9vw [6] via @DailyCaller [7]

Friends with Trump. President Trump and Tiger Woods have maintained a friendship throughout even the most tumultuous of times.

In February, the President joined Woods and Nicklaus at his course in Woods’ hometown of Jupiter, Florida.

The golf legend responded, “No matter who is in the office, you may like, dislike personality or the politics, but we all must respect the office.”

That was from the same network at which hosts took turns blasting Woods [16] as unintelligent and “not really black\” due to his friendship with President Trump.