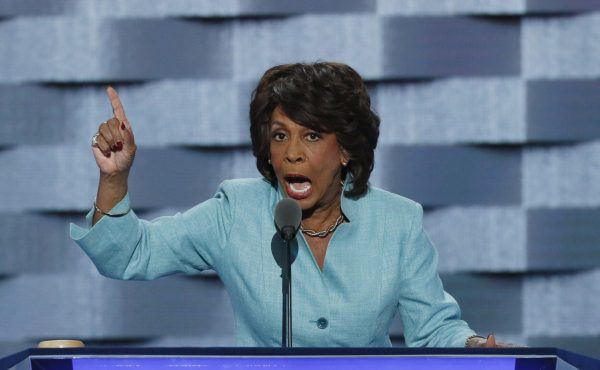 Congresswoman Maxine Waters (D-Calif.) said it was the “correct thing” for all charges to be dropped [1] against Jussie Smollett [2], the actor on the hit series “Empire” who was accused of orchestrating a hate-crime hoax.

Last week, the city dropped 16 charges against Smollett, including filing a false report.

Police say Smollett created a false assault on January 29; the actor claimed he was attacked by two men because he was gay and black.

Related: ‘SNL’ Takes on the Smollett Controversy — Watch What Happened [3]

Police say none of this happened. That doesn’t seem to matter much to Maxine Waters.

“It’s the correct thing that the charges were dropped [1],” Waters said on Saturday during an interview backstage at the 50th Annual NAACP Awards.

“First of all, we probably will never know all of the details. We’ve heard a lot of information. No one was hurt — that is, physically, killed, shot — he never committed a crime before, he forfeited the bail, and it’s this kind of situation where they close the case all over the country every day.”

“I have learned this isn’t unusual,” she added.

Maxine Waters says its the "correct thing" that charges were dropped against Jussie Smollett https://t.co/4vPeag6Jxf [4] pic.twitter.com/sWJYOCuGCW [5]

According to Waters, the Smollett case received “a lot of attention because of who he is — he’s an extremely talented man who people have come to love because he is on TV. I’m hopeful that he will go on with his career and be successful.”

“I would love to see him, and I am looking forward to seeing him very soon,” Waters added.

Defending Smollett is nothing new for Waters.

“Waters, who has been one of Congress’ most vocal supporters of Smollett, attended the ‘Empire’ star’s first concert after the allegedly staged attack,” Breitbart reported [7].

Waters told [8] The Grio, “I know Jussie. I love him. His family’s a friend of mine. I know his sisters, I’ve met his mom, and I called already to Jazz, one of the sisters, to talk to her about what’s happening, what’s going on,” Waters said.

“So she said he’s OK, he’s out of the hospital. We didn’t talk about it much more than that, but I was on my way to Chicago to see about him. You know what I’m saying? I love him; he’s a fantastic human being; he’s so giving.”

What happens next in the Jussie Smollett debacle is anyone’s guess, but one thing is clear: Maxine Waters will defend him no matter how bad it gets.

"It’s the correct thing that the charges were dropped," Rep Waters said. "We’ve heard a lot of information. No one was hurt — that is, physically, killed, shot…"