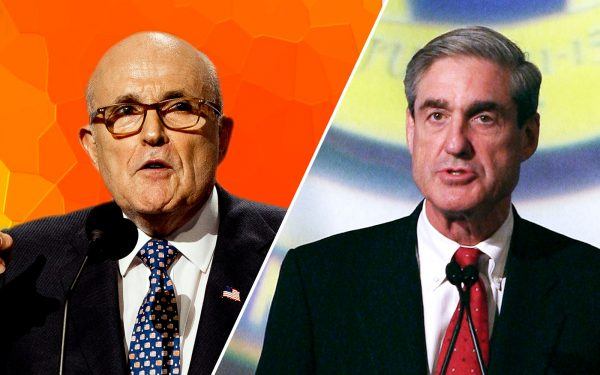 “It’s over,” said Rudy Giuliani to host Laura Ingraham on Fox News’ “The Ingraham Angle” on Thursday night about the collusion accusations that were definitely addressed in special counsel Robert Mueller’s report, which Attorney General Bill Barr released with redactions on Thursday to Congress and to the American public.

“It’s over,” repeated Giuliani, the former mayor of New York City who has been serving as a legal adviser to the president. “But they just don’t know it yet.”

After a nearly two-year investigation, the report released on Thursday showed that special counsel investigators did not find any proof of any collusion between the 2016 Trump presidential campaign and Russia — after Democrats and leftists insisted every single day practically since President Donald Trump was elected that this was the case.

The report did show some controversial actions by the president that the special counsel team reviewed as part of the probe.

Democrats immediately went after Barr, said he was acting as a lawyer for the president rather than as an attorney general — and demanded a fully unredacted version of the report.

Related: Bill Barr on Mueller Report: Russians Did Not Have Cooperation of Trump or Associates [1]

Republicans, for their part, want to know how the Russia collusion narrative began in the first place.

Giuliani told Ingraham his biggest issue with Mueller was the “partisan,” “biased” staff of people he selected to work on the investigation.

“The fact is the actions of an innocent man are totally different from the actions of a guilty man,” said Giuliani. “So, if I’m a bank robber and I rob a bank and I tell you to say that we had dinner the night the bank was robbed, I’m asking you to lie. But if I’m an innocent man and we had dinner, and you’re my alibi witness but the honest one, I’m asking you to testify for me, I’m even pushing you to do it. I’m begging you to do it … I’m just seeking justice.”

“But did the president tell anyone to lie?” said Ingraham.

“What incenses you the most about this report?” Ingraham asked Giuliani. “You’ve been tough on [it].”

“The complete deception of trying to present the facts from [now-disgraced attorney Michael] Cohen as if they are true,” responded Giuliani. “I mean, Cohen isn’t capable of telling the truth.”

“Yes. I can tell you any of the things I have personal knowledge about on the report from Cohen are complete lies. And to take him and put them there as if we are going to take his credibility over the president of United States is totally warped. At least you’ve got to put out in that report the issues of his credibility, [that] some people are warned that he lied … when he [said he] didn’t seek a job with the administration, he didn’t seek a pardon.”

“When I finished, I said to my co-counsel, did you find anything new here?”

Said Giulaini, “He sought a pardon with me.”

He added about the Mueller report, “You know what happened today? They didn’t get anything in this report. This report has nothing [new]. It’s all the same garbage we’ve been talking about for about a year. I read through it, finished it at 4 in the morning. When I finished, I said to my co-counsel, did you find anything new here? Maybe a little detail here, little detail there, [but otherwise it has] every incident we [already] know about … Now, it’s necessary to have the same amount of attention to figure out how this all started, who made it up, where did it come from.”

Watch this video from earlier — and share your thoughts: