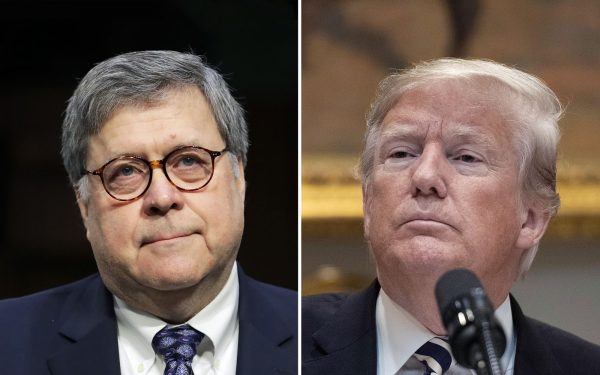 Attorney General Bill Barr stressed on Thursday morning during a press conference that neither Donald J. Trump nor any of his campaign associates took part in any collusion activities with the Russian government, according to the special counsel’s investigation.

He said the American people should be grateful for this.

Neither did the special counsel find any evidence of obstruction of justice after having reviewed at least 10 potential areas for that.

“President Trump faced an unprecedented” inquiry, Barr also said. And “the president was frustrated and angered by a sincere belief that the investigation was undermining his presidency,” Barr said as well, though the president did not exert any executive privilege or stand in the way of the special counsel’s investigation.

“So that’s the bottom line. After nearly two years,” added Barr, no evidence at all was found that Trump or any of his associates worked in collusion with the Russians.

The Department of Justice, headed by Barr, is releasing Thursday morning a redacted version of the report filed after the nearly two-year-long special counsel investigation into potential collusion by the 2016 Trump campaign with Russian interests.

The report on Thursday will be made available to Congress and to the public, the Justice Department had announced this past Monday morning.

Mueller and his team spent nearly two years looking into possible crimes committed by the president or his associates, with a particular focus on whether or not they colluded with Russian interests during the presidential election of 2016.

Emphasized Barr on Thursday morning, “There was no collusion.”

Trump himself tweeted on Thursday morning the following messages:

No Collusion – No Obstruction! pic.twitter.com/diggF8V3hl [4]

And see these other tweets as well:

Watching AG Bill Barr's press conference.He is a true statesman, one of a very few in Washington these days. He is going by the book, regardless of the intense smears against him by the media & the Dems

Just imagine if Bill Barr had started as AG on day 1.

“There was no evidence of Trump campaign ‘collusion’ with the Russian government’s hacking.” -AG Bill Barr

Barr also said the report contains “limited redactions,” and that those redactions “have been clearly labeled” so that readers can see “which redactions” respond to which of the four key categories he’s identified. The redactions were applied by Department of Justice attorneys.

President Trump is scheduled to preside at a wounded warriors’ event [9] on Thursday morning at the White House and is likely to mention, in some form or another, the words of Barr this morning.

Democratic leaders for the better part of two years have said they had evidence of collusion — and again and again, and quite definitively, Barr disputed that on Thursday morning and said the report will dispute that as well.

Republican National Committee (RNC) Chairwoman Ronna McDaniel on Thursday released a statement about the release of the Mueller report. “This is a complete and total vindication of President Trump,” she said. “It is increasingly clear that the only scandal here is the Obama administration’s repeated failure to act against Russian cyber meddling. Instead, they prioritized spying on a political opponent — the Trump campaign — and used a phony DNC-funded dossier as justification.”

She added, “It is now time to get to the bottom of how an investigation based off fake and partisan information began in the first place. After two years and over $35 million, American taxpayers deserve answers and the integrity of our democratic process depends on ensuring this never happens again.”

And see this earlier video: