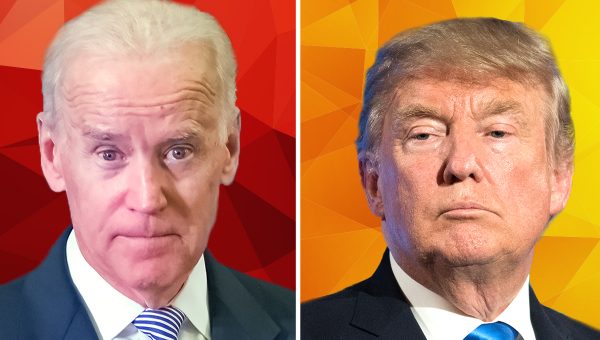 Former Vice President Joe Biden began a speech on Friday before the International Brotherhood of Electrical Workers (IBEW) with a joke about having permission to touch women and children.

Several women have come forward [1] in recent days, accusing Biden of inappropriately touching [2] them and making them feel uncomfortable.

The accusations began when former Nevada assemblywoman Lucy Flores [3] wrote a column alleging that the potential 2020 candidate inappropriately kissed her and smelled her hair.

Related: Biden Responds to Women’s Allegations: ‘I Will Be More Mindful’ [4]

Biden’s history of being “handsy” with women and children has been an open secret [5] for some time.

He even has a history of making female Secret Service agents uncomfortable by skinny dipping [6] or walking around the house without clothes.

All of it has been given extra scrutiny with new allegations and the backdrop of the #MeToo movement. Biden, in his first public comments, decided to go with the comedy routine to deflect from the controversy.

‘Permission to hug.’ After being introduced by IBEW President Lonnie Stephenson, who gave him a pat on the shoulder, Biden told the crowd, “I just want you to know, I had permission to hug Lonnie.”

It’s difficult to ascertain how joking about the subject matter at hand will play out for those taking the personal space complaints toward the former vice president quite seriously.

WATCH: Former Vice President Joe Biden joked that he “had permission to hug” IBEW president Lonnie Stephenson during his remarks at a union conference today.

His joke was met with laughs and cheers from the crowd. Learn more: https://t.co/XcnqrGD8pa [7] pic.twitter.com/TKHumUVcui [8]

After receiving a generally positive response to the joke, Biden felt comfortable about repeating it later on when he invited some children up on stage.

After shaking their hands, Biden put his arm around one of the boys on stage, joking, “By the way, he gave me permission to touch him.”

Biden calls kids up on stage, puts his arm around a boy and says “by the way, he gave me permission to touch him” pic.twitter.com/XkfrgtwYC8 [10]

One can only imagine what President Donald Trump could use to mock Biden after hearing that sound bite.

Earlier this week, the president shared a video of Joe Biden discussing the unwanted touching of women, complete with edits of the vice president approaching himself from behind, grabbing his shoulders, and sniffing his hair.

“Social norms have begun to change,” Biden said in his video response to the allegations. “They’ve shifted, and the boundaries of protecting personal space have been reset, and I get it, I get it.”

Does being “mindful” mean cracking jokes about what others have taken as a serious breach of etiquette and behavior by a man who’s seeking to become president?