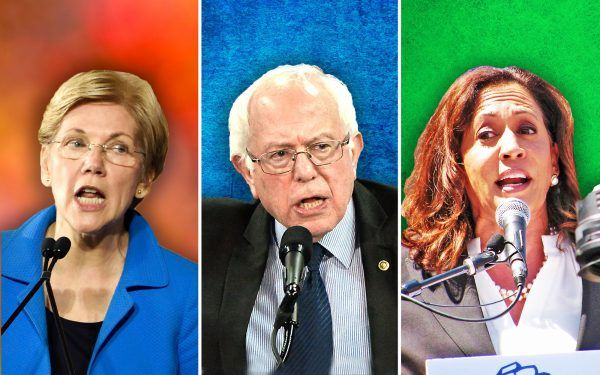 All they have to do is avoid going completely insane, in our opinion.

That’s all it will take to emerge from a Democrat primary of roughly 20 candidates, each with their own oddity and far-Left capitulation to the base that makes them seem unhinged to the average voter.

Playing it straight would help.

But they can’t even do it for one night.

Related: Biden Accuser Lucy Flores Tells Fox News, ‘I Will Not Be Voting for Him’ [1]

Sanders’ colleague, Sen. Kamala Harris (D-Calif.) (shown above right), followed it up by saying “we should have that conversation” about allowing the Boston Marathon bomber to vote [3] from prison.

Tsarnaev and his brother killed four people, including an 8-year-old boy, and injured 280 others.

First off, if you’re a Democrat candidate, the only reason you’re going to promote a certain voting bloc is that you believe that group is more prone to vote for you.

What does it say about Bernie that he believes violent felons, including terrorists, are more apt to vote for the Left?

Sanders, the current frontrunner for the Democratic nomination, made it quite clear he wants convicted terrorists, sex offenders, and murderers to vote from prison [5].

Not after they serve their time and debt to society. No, he wants them to vote from their cell. And Bernie’s biggest concern for the Boston bomber? That he gets his absentee ballot.

Harvard student Anne Carlstein asked Sanders if his position would support “enfranchising people” like Tsarnaev, someone who is “convicted terrorist and murderer,” adding concerns it would benefit those “convicted of sexual assault.”

“I think the right to vote is inherent to our democracy. Yes, even for terrible people, because once you start chipping away and you say, ‘That guy committed a terrible crime, not gonna let him vote. Well, that person did that. Not gonna let that person vote,’ you’re running down a slippery slope. So, I believe that people who commit crimes, they pay the price. When they get out of jail, I believe they certainly should have the right the vote, but I do believe that even if they are in jail, they’re paying their price to society, but that should not take away their inherent American right to participate in our democracy.”

Watch the clip below …

Sanders’ stance is “beyond extreme, and the rest of the field should be asked to condemn this insanity,” according to Michael Ahrens, RNC communications director.

Kamala Harris then followed up Bernie’s crazed comments by saying she was open to having a discussion about allowing terrorists to vote from prison.

She initially called voting a right that people “should not be stripped of needlessly,” adding that if released felons have that right taken from them, that is racist.

CNN host Don Lemon, who incidentally believes the biggest terrorist group [8] in America is white men, pushed her further by asking about the right to vote for people currently in prison or “on death row.”

“I think we should have that conversation,” Harris replied.

There is no illegal vote that the Democrat Party is unwilling to court.

There is no felon the Democrat Party is unwilling to side with or support.

And now, there is no terrorist the Democrat Party is unwilling to fight for these days.

Is there nobody with a sense of decency in the resistance party?