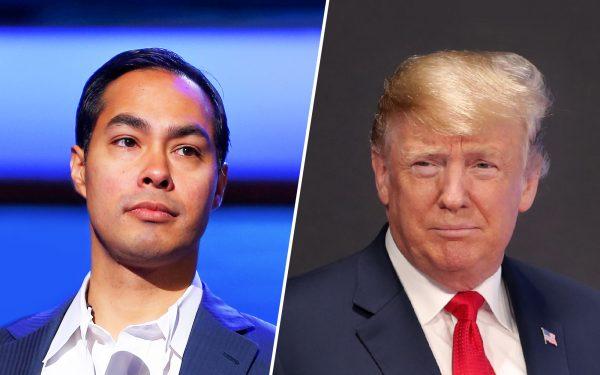 The issue of reparations for African-Americans has come front and center among the nascent Democratic presidential field, with candidates supporting ideas on everything from free college tuitions to handing out checks for the family members of former slaves.

Julián Castro, the former Secretary of Housing and Urban Development under President Barack Obama [1], said on Sunday that he was not ruling out direct payments to African-Americans for the legacy of slavery — in a move that separates him from his fellow Democratic challengers.

Speaking on CNN’s “State of the Union” from his home state of Texas — where the former San Antonio mayor is attending the South By Southwest Festival along with a number of other Democratic candidates — Castro (shown above, beside President Trump) questioned why there is opposition to paying African-Americans for the enslavement of their ancestors.

Other candidates are discussing tax credits and other subsidies, rather than direct payments for the labor and legal oppression of slaves and their descendants.

Vermont Sen. Bernie Sanders would put resources such as Medicare for All and tuition-free college into distressed communities.

Castro balked at this and said he doesn’t think that’s the proper argument for reparations if “a big check needs to be written for a whole bunch of other stuff.”

The festival has grown from obscure roots into a weeklong juggernaut of tech, politics and entertainment.

Inslee told CNN that while in office, “I have been very, very committed to making this a more just and open and tolerant society. And that’s one of the reasons Washington is so successful.”

Sanders was in New Hampshire, while Sens. Elizabeth Warren of Massachusetts [3] was in Dallas, Kamala Harris of California was in Miami, and Amy Klobuchar of Minnesota was in Tampa.