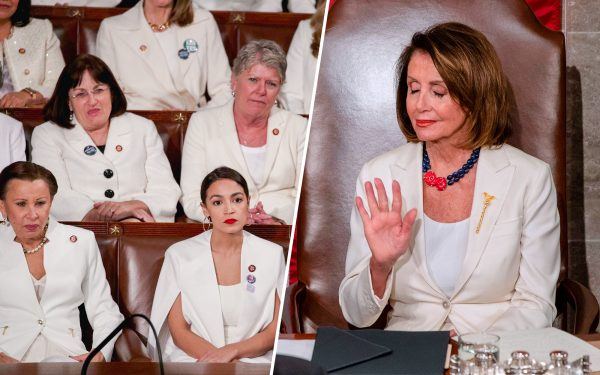 In a move sure to rile up the radical freshmen Democrats taking charge in the House, Speaker Nancy Pelosi (D-Calif.) admitted she doesn’t support impeachment for President Trump.

In an interview [1] with The Washington Post magazine, Pelosi said that “unless there’s something so compelling and overwhelming and bipartisan,” pursuing impeachment would only serve to further divide an already politically fractured nation.

“I’m not for impeachment,” she told the publication.

“This is news. I haven’t said this to any press person before,” Pelosi continued.

“But since you asked, and I’ve been thinking about this, impeachment is so divisive to the country that unless there’s something so compelling and overwhelming and bipartisan, I don’t think we should go down that path because it divides the country.”

This has been the attitude of Pelosi and top Dems in private – no need go down the impeachment route if the Senate GOP won’t vote to convict. Otherwise, it may appear as a partisan exercise and help Trump’s re-elect, they fear https://t.co/i0grx1VLZ6 [2]

Pelosi, who just had her hat handed to her by freshmen Democrats during the Ilhan Omar condemnation debacle [4], still managed to make some comments to throw a bone to the radicals, calling the president “ethically,” “intellectually,” and “curiosity-wise unfit.”

The New York Post editorial board [5] writes that Pelosi’s admission stating she would need “something so compelling and overwhelming and bipartisan,” is proof that “there isn’t” anything.

It should also be noted that for all of her faults, Pelosi is a cold and calculating politician when it comes to her opponents.

She knows what she’s doing.

These preemptive strikes against impeachment may very well serve as a means to soften the blow for when the Mueller investigation is completed and they more than likely conclude there is no evidence of collusion between the Trump campaign and Russia.

Extremist Dems want to impeach. Pelosi’s comments, whatever the reasoning, will surely rile up her extremist base.

On day one of the Democrat Party’s takeover of the House, Rep. Brad Sherman, a California Democrat, announced his plans to bring forward articles of impeachment [7] against President Trump.

Other Democrat lawmakers such as Al Green (Texas), Chuck Schumer [8] (New York), and Maxine Waters (California), have also made comments in the past that are supportive of the effort to impeach.

Then, of course, there was Rep. Rashida Tlaib, who famously screeched to her supporters that we’re “going to impeach the motherf*****.”

House Speaker Nancy Pelosi just said she is not for impeachment because President Trump is “just not worth it.”

“The sound you hear right now is people at the RNC doing the happy dance on their tables,” @amandacarpenter [9] says https://t.co/H9pn0WD0F6 [10] pic.twitter.com/WraDUeGl4Y [11]

“I happen to disagree with that take,” socialist Rep. Alexandria Ocasio-Cortez said of Pelosi’s statement.

Support for Pelosi. House Majority Leader Steny Hoyer of Maryland took a shot at Ocasio-Cortez, Tlaib and Omar, noting that Pelosi has more Democrats that she serves than just the freshman in Congress.

Hoyer slams Tlaib, Omar, Ocasio-Cortez when asked about Dems who would still like to push for impeachment, despite Pelosi saying she opposes impeachment. Hoyer: “We’ve got 62 new (Democratic) members. Not three”

In other words — “you’re not nearly as important as you think you are.”

However, as stated before, those same three radicals managed to run roughshod over Pelosi and more moderate Democrats when it came to condemning Omar over her clearly anti-Semitic comments [4].

Is this a stand Hoyer and Pelosi are now going to take in order to reassert their power?

Read more at ThePoliticalInsider.com:
Howard Schultz Slams Socialist Democrats – ‘There’s Nothing Free in America’ [15]
Ocasio-Cortez: America As It Currently Stands is ‘Garbage’ [16]
According to New Poll, Half of Young People Want to Live in a Socialist America [17]