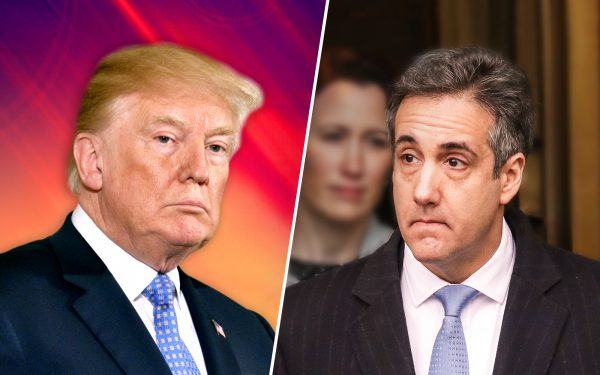 President Donald Trump on Friday bashed his former lawyer Michael Cohen as a fraudster who lied about wanting a pardon and job.

Cohen has worked with federal investigators and testified during congressional hearings against the president.

He’s claimed his former client is a racist with a history of shady business practices, tax fraud and hush money payments. He also claimed to have never sought a pardon from the president or a job in his administration — which the president denies.

“Bad lawyer and fraudster Michael Cohen said under sworn testimony [1] that he never asked for a pardon,” Trump said in a tweet.

“His lawyers totally contradicted him. He lied! Additionally, he directly asked me for a pardon. I said NO. He lied again! He also badly wanted to work at the White House. He lied!”

Cohen filed a lawsuit just a day earlier, claiming the president refused [3] to pay him promised legal fees after he began cooperating with federal prosecutors.

Cohen has admitted to many of the allegations since turning himself in on August 21. The lawsuit is demanding the president pay $1.9 million in his legal fees.

The disgraced attorney recently appeared for three days of hearings during the same week.

The House Oversight and Reform Committee hosted him for the only [4] hearing that was publicly aired — on February 27.

Reps. Jim Jordan (R-Ohio) and Mark Meadows (R-N.C.) called for a perjury investigation [2] against Cohen afterward; they believe he made false statements.

Special counsel Robert Mueller has been investigating the president for possible crimes, with a focus on collusion with Russia. Cohen drew the attention of the special counsel team for allegedly helping to cover up extramarital affairs and conduct shady business dealings on behalf of the president.

Bad lawyer and fraudster Michael Cohen said under sworn testimony that he never asked for a Pardon. His lawyers totally contradicted him. He lied! Additionally, he directly asked me for a pardon. I said NO. He lied again! He also badly wanted to work at the White House. He lied!

Cohen also admitted to lying to lawmakers [6] in federal court about how much he discussed his proposed business project in Moscow with the president as part of a plea deal.

The special counsel team suggested Cohen receive a tough but fair sentence in a court filing on December 7. The filing suggested it should reflect his lies but also his efforts to remediate his misconduct.

The special counsel team has taken down a handful of other former associates of the president since launching its investigation in May 2017. But it has yet to connect the president himself directly to any collusion allegations — and much of the charges already issued are due to unrelated criminal allegations.

Former Trump campaign chairman Paul Manafort was indicted by a grand jury on multiple charges. The indictment was requested by the special counsel and related to consulting work for the pro-Russian government in Ukraine.

Manafort later agreed to cooperate with prosecutors but allegedly violated his plea deal by lying to investigators.

On Friday he was sentenced to 47 months in prison [9].