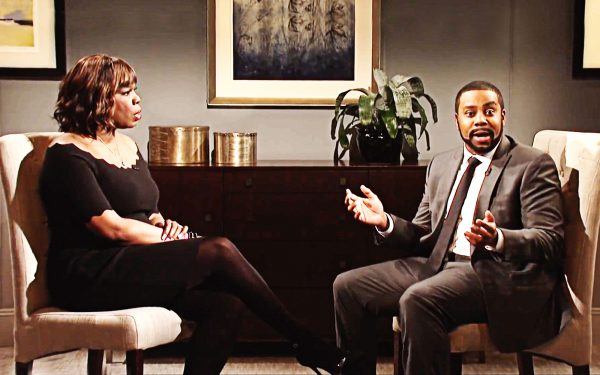 “Saturday Night Live” took a break from attacking President Donald Trump in their cold open segment to instead target musician R. Kelly, who was recently indicted on multiple counts of aggravated sexual abuse [1].

The show specifically focused its attention on a viral interview that “CBS This Morning” co-host Gayle King conducted with R. Kelly this past week.

In the original interview, R. Kelly denied all allegations against him — and at one point jumped out of his chair and began ranting directly to the camera.

“I’m fighting for my f***ing life!” he screamed at one point.

He later said he would have to be “stupid” to have committed the crimes of which he’s been accused. [2]

“Please call me a victim,” Thompson’s R. Kelly said at one point in the segment.

He later added, “You can start a rumor about any celebrity just like that. All you got to do is push a button on your phone and say R. Kelly did this to me. And then attach a video of me doing that thing, and people will believe you. It’s scary.”

The show brought up R. Kelly later in the show, when Pete Davidson appeared on the Weekend Update segment and likened fans of the disgraced rapper to Catholic churchgoers.

“But if you support the Catholic church, isn’t that the same thing as being an R. Kelly fan? I don’t really see the difference — only one’s music is significantly better,” joked Davidson.

The dig earned both boos and applause from the studio audience.