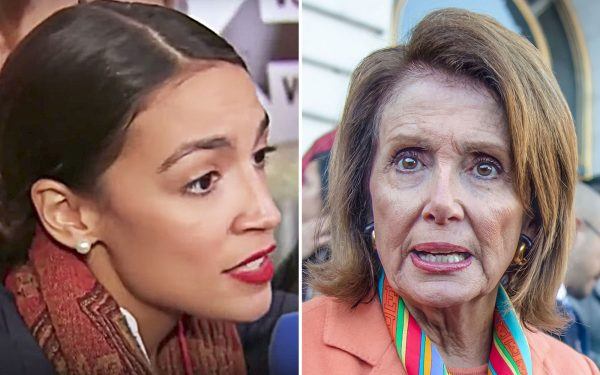 After more than two dozen moderate Democrats broke from their party’s progressive wing and sided with Republicans on a legislative amendment Wednesday, New York Democratic Rep. Alexandria Ocasio-Cortez (shown above left) reportedly sounded the alarm in a closed-door meeting on Thursday and said those Democrats were “putting themselves on a list.”

The legislation that prompted the infighting was a bill that would expand federal background checks for gun purchases, The Washington Post reported.

But a key provision requiring U.S. Immigration and Customs Enforcement (ICE) to be notified if illegal immigrants attempt to purchase guns saw 26 moderate Democrats side with Republicans.

According to The Post, House Speaker Nancy Pelosi (D-Calif.) (above right) scolded her wayward center-leaning colleagues, telling them, “We are either a team or we’re not, and we have to make that decision.”

But Ocasio-Cortez reportedly took it a step further.

She said she would help progressive activists unseat those moderates in their districts in the 2020 elections, the report said.

Related: Ocasio-Cortez May Have Broken Congressional Rules Even if Her Boyfriend Is Not a Paid Staffer [1]

“She said that when activists ask her why she had to vote for a gun safety bill that also further empowers an agency that forcibly injects kids with psychotropic drugs, they’re going to want a list of names and she’s going to give it to them,” Trent said, referring to ICE.

Ocasio-Cortez has vehemently denounced ICE since bursting onto the political stage.

But has also raised concerns among fellow Democrats that she’s picking fights with her own party.

The freshman congresswoman appears unfazed by the pushback, often hitting back at her critics on Twitter.

Her star status and outsize influence bringing Democrats on board with controversial policies like the Green New Deal have rankled some long-time members.

But the freshman congresswoman appears unfazed by the pushback, often hitting back at her critics on Twitter.

In response to criticism earlier this year from former Sen. Joe Lieberman, Ocasio-Cortez tweeted a snarky, “New party, who dis?”

The gun bill on the floor earlier this week would expand the scope of background checks and require nearly all gun buyers to undergo one — including if they bought at a gun show, online or in a private transaction.

Bradford Betz is an editor for Fox News. This Fox News [5] piece is used by permission.

Read more at Fox News:
Offset Reveals How He and Cardi B Got Back Together [6]
The Property Brothers Made Nearly Half a Billion Dollars in 2018 [7]
Drake’s Dad Declares Support for ‘Friends’ R. Kelly and Jussie Smollett [8]