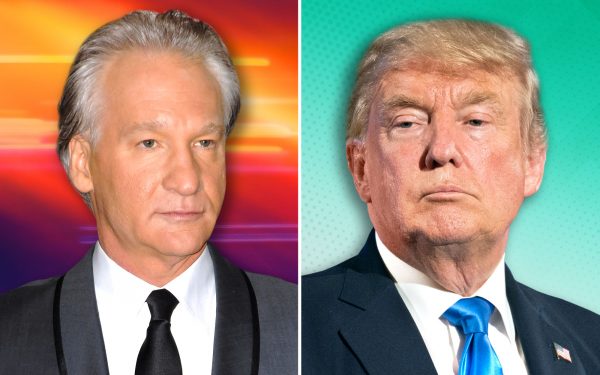 Now that special counsel Robert Mueller has wrapped up his investigation and turned in his report without finding any evidence of collusion [1] between President Donald Trump and Russia or issuing any further indictments, those on the Left are in complete meltdown mode.

Said “Real Time” host Bill Maher (shown above left) on Friday night to a panel of guests, “Did the Democrats put too must trust in the Mueller report? Because I don’t need the Mueller report to know he [Trump] is a traitor. I have a TV.”

Related: Mueller Spent Two Years on Report, Yet Schiff Feels This Is Not Enough [2]

Chelsea Handler, a fervent anti-Trump liberal, said bizarrely on Twitter that she was “sexually attracted” to the special counsel and former FBI director.

“If I’m being completely honest, I am very sexually attracted to Robert Mueller,” she wrote.

“I know it’s not meant to be, but that doesn’t mean I won’t hang a poster of him above my bed.”

If I’m being completely honest, I am very sexually attracted to Robert Mueller. I know it’s not meant to be, but that doesn’t mean I won’t hang a poster of him above my bed.

Liberal cable news host Chris Matthews was very upset that after nearly two years and millions upon millions of dollars spent, Mueller did not plan to issue any more indictments of anyone related to Trump’s business operations or his associates.

“Maybe he missed the boat here,” said Matthews. “Because we know about the Trump Tower meeting in June 2016, we know about the meeting at the cigar bar with [Konstantin] Kilimnik [a Russian political consultant]. My God, we know about all of those meetings with [Sergey] Kislyak [a Russian diplomat] at the Republican convention in Cleveland. All these dots we’re now to believe don’t connect.”

Matthews seemed particularly “livid” that neither Trump nor his children nor his “henchmen” would face any criminal charges as a result of the special counsel probe, as Fox News [4] also noted.

“Why was there never an interrogation of this president?” said a puzzled Matthews to viewers. “We were told for weeks by experts, ‘You cannot deal with an obstruction-of-justice charge or investigation without getting the motive’ … How could they let Trump off the hook? He will not be charged with obstruction of justice or collusion without having to sit down with the special counsel Mueller and answer his damn questions. How could that happen?”

The Democrats are now taking up a new line of argument — they want that report, and all of it.

Many of these liberal cable news hosts have spent the bulk of their commentary and programming these past two years going after President Trump in one form or another and hoping Mueller would kill the Trump presidency — so to say this is quite a letdown for them is rather the understatement.

Which is why many of the Democratic lawmakers — including those who want to run against Trump in 2020 — are now taking up a new line of argument. They want that report — and all of it.

Sen. Kamala Harris (D-Calif.) wrote on Twitter on Saturday morning, “Releasing the Mueller report to the public is about protecting our democracy and the people’s confidence in our elections and government. The White House must not interfere in any way — give the information to the American people.”

Releasing the Mueller report to the public is about protecting our democracy and the people’s confidence in our elections and government. The White House must not interfere in any way — give the information to the American people.

CNN [6], for its part, appears desperate to keep hope alive that something, anything, negative will come out about the president.

“Trump’s son-in-law Jared Kushner is providing records to the House Judiciary Committee for its probe into obstruction of justice, according to a source,” the network said. “The move indicates that the conclusion of Mueller’s probe does not mean the end of [anti-Trump] investigations.”

Others, though, are staying much more level-headed about the conclusion of the special counsel’s findings — which Attorney General Bill Barr is now reviewing as he and his team prepare to release a summary to Congress and/or the American people. That summary could come as early as late Saturday night or early Sunday morning.

Here’s a selection of the more rational (and some entertaining) reactions on Saturday to the special counsel’s news on Friday:

The problem is Trump’s critics hate Trump so much that when their collusion allegations are not true, they WANT them to be true. They SHOULD be true – regardless of Mueller’s findings. So they don’t see this as good for the country. They see it as bad for their point of view. https://t.co/zSoBKhjjVC [7]

Would it not be smart for EVERYONE to hold their fire and opinions until at least we get summary of the Mueller Report?

Democrats have spent the past two years using speculation about the Mueller Report to vilify @realDonaldTrump [10] and threaten impeachment. If the report proves there was no collusion, will they finally admit to the American people that this was a witch hunt and move on? pic.twitter.com/IUrvvTRZuv [11]

I hope you all realize that CNN and MSNBC are going to pick one insignificant paragraph in the Mueller report to focus on that makes Trump look bad while ignoring the fact that their two year Russian conspiracy theory has crumbled apart.

No need for the volume when the faces tell it all. #NoCollusion [14] #MuellerReport [15] pic.twitter.com/QjEAsxvfAu [16]

Imagine watching MSNBC or CNN for the last two years and learning:

1. Mueller finished his work without any DOJ interference.

2. No American will be charged for colluding with Russia.

It wasn't just Democrats who falsely speculated, many in the media went right along with it.

Anything to avoid talking about #Mueller [19]. pic.twitter.com/FuVLcRl3Bt [20]

People in the Department of Justice, Intel community, and FBI need to go to jail

All lied to Congress

Prosecute ALL of them