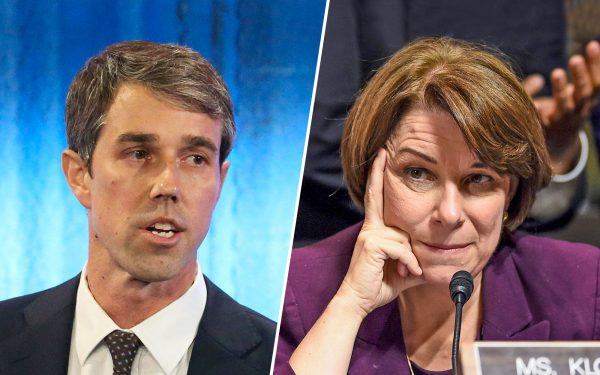 “It was probably more when I got to college. When I was growing up, in high school, that’s not what girls thought they were going to do,” the Democratic senator said during a Sunday interview on NBC News’ “Meet the Press.”

“My parents, I think, thought it was a possibility. But I really didn’t. And so for me, it’s something that’s happened over time, as I’ve realized I can do things,” Klobuchar reportedly said.

“I can get elected to the secretary-treasurer of my high school class. I can move on from there. And so I think it’s something that I didn’t have from birth.”

Her reported comments appear to reference O’Rourke’s statements about being “born” for a White House run in a glowing Vanity Fair profile that has drawn criticism.

“I want to be in it,” O’Rourke said in the magazine’s cover story. “Man, I’m just born to be in it, and want to do everything I humanly can for this country at this moment.”

The Texan’s comments to Vanity Fair, along with his decision to rule out a second Senate run last month, have been called emblematic of his white male privilege, amid a race with several viable female and African-American candidates, by critics within the Democratic Party.

“If a woman was presented with a similar choice: Do that less ambitious, but better-for-the-party thing, versus more ambitious but longer-shot thing, I don’t see people being super understanding when she takes the latter,” Jess McIntosh, a Democratic strategist and former Hillary Clinton aide, told The New York Times.