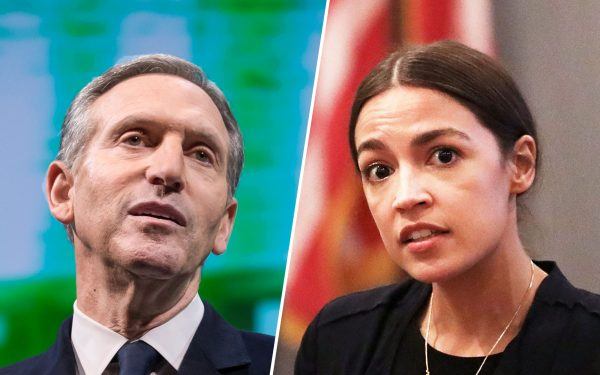 Howard Schultz, the former Starbucks CEO and possible independent candidate for president, slammed socialist Democrats for proposing unrealistic ideas and noted that nothing in America is free.

Speaking at the South by Southwest Conference (SXSW) in Austin, Texas, this past weekend, Schultz (shown above left, with Alexandria Ocasio-Cortez beside him) fired daggers at extremists in the Democrat Party — giving some indication why he can’t consider making a presidential run as a member of their resistance.

He said he’s dismayed to see so many radical socialists taking over the party, something he suggests is a far cry from adhering to American values.

Related: Yet Another Democrat Comes Out for Reparations for African-Americans [1]

“For us to start moving toward a level of socialism is such an extreme position and something that is inconsistent with the values, the heritage, and the tradition of the country,” Schultz said.

“That is what Bernie Sanders, Elizabeth Warren, and others are proposing to try and defeat Donald Trump, with a far extreme proposal.”

Schultz believes that if any of the extreme Democrats end up being the nominee against the president in 2020, Trump will easily coast to reelection.

Took aim at AOC. Perhaps Schultz’s most effective commentary came when he attacked Rep. Alexandria Ocasio-Cortez (D-N.Y.), who herself spoke at the conference [2].

The New York socialist did not disappoint her radical base [2].

In front of a Left-leaning crowd, she delivered some incredibly extreme positions, not the least of which included:

Schultz took pointed aim at her platforms, particularly at the Green New Deal — which is a joke among reasoned thinkers — and her desire to provide wages to those “unwilling” to work.

He slammed elements of the Green New Deal as “well-intentioned” ideas but ideas that are “never going to happen.”

“Let’s propose things that are true, that are honest, that are sincere, and that are realistic,” he implored.

Blasted the ‘free’ promises. Schultz took aim at the socialist Democratic Party in general, with its faux promises of free things for the American people.

“There is nothing free in America. These proposals about Medicare for All, free college, and a government job for everybody, that is not free”

“That means that taxes for everyone is going to have to go up” pic.twitter.com/qTNVUQ7I78 [9]

“So these proposals about Medicare for All, and free college, and a government job for everybody, that is not free.”

Been saying this for awhile. Schultz’s comments at the SXSW conference have become familiar.

The CEO of a major corporation such as Starbucks seems to grasp the notion that one can’t simply promise things to people for free [11].

In an interview with the ladies of “The View” in January, Schultz said that promising to hand out “free” things to the American people is an idea that is unsustainable.

“In order to run as a Democrat today, you have to fall in line with free Medicare for everybody — free — free college for everybody, a free job for everybody,”@HowardSchultz [12] tells us why he would run as an Independent in 2020. “We can’t afford to do it free” https://t.co/PCMHBZ9q65 [13] pic.twitter.com/dOAYaeVAVp [14]

“I respect the Democratic Party. I no longer feel affiliated because I don’t know their views represent the majority of Americans,” Schultz added.

Is he right? Do you think they represent American values?