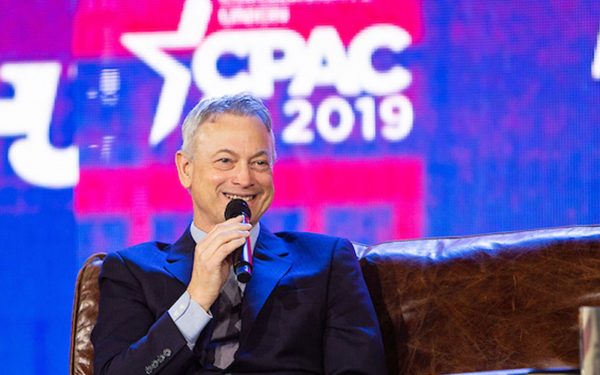 “Forrest Gump” and “CSI: NY” star Gary Sinise saluted American veterans during a talk he gave at this year’s CPAC.

During his time at the event at Liberty University’s Vines Center, Sinise asked all veterans in the audience to stand up to be recognized.

He then went on to explain his motivation for helping veterans through his organization, the Gary Sinise Foundation [1].

“I have a lot of veterans in my family,” the actor and author [2] said. “But it wasn’t until I met the Vietnam veterans on my wife’s side of the family that it awakened something in me as a young person.”

Sinise said playing a Vietnam veteran in 1994’s “Forrest Gump” — a role for which he was nominated for an Academy Award — changed his life.

After the film, he began volunteering with the USO and visiting with troops. He also eventually started the band The Lt. Dan Band — named after his “Forrest Gump” character — and the group continues to play free shows for soldiers to this day.

Related: Gary Sinise Movie Is Donating a Large Portion of Its Profits to Veteran Charities [3]

Sinise plays bass in the band.

“It’s been a beautiful mission,” Sinise said of his work with veterans.

“It’s given my life great purpose and meaning to be able to use the success I’ve had in movie and television business to do some good to help somebody else.”

For more on Sinise’s work for and with veterans, check out the video below: