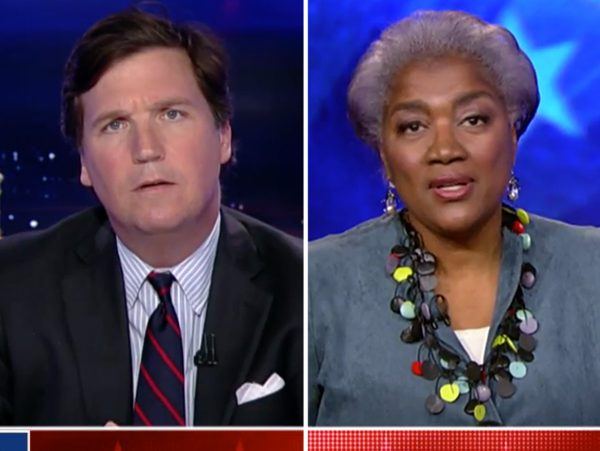 It was announced Monday that former Democratic National Committee Chairwoman Donna Brazile (shown above with Tucker Carlson) will be joining Fox News and Fox Business as a political analyst.

And when the news broke …  liberals lost their minds.

Donna Brazile has joined Fox News as a contributor.

Sorry, Donna Brazile – I just became one of your critics. Your action gives Fox News a measure of credibility it does not deserve, and for that reason alone you are contributing to their dangerous disinformation agenda… #MondayMotivation [4] https://t.co/oIc7kH1t4w [5]

Donna Brazile was already dead to me so thankfully I'm happy she is at Fox News so I know I won't have to see her. https://t.co/PWplCOABCn [7]

But what about Judge Jeanine? While the Left goes nuts over this, here’s a good question for conservatives: Why did Fox News hire this prominent Democrat — at the same time it suspended Judge Jeanine Pirro? [9]

Popular Fox News host Judge Jeanine [10] was suspended and her program temporarily replaced on Saturday due to some controversial statements the host made about Rep. Ilhan Omar (D-Minn.), who is Muslim, about her religion.

Even President Donald Trump weighed in:

Bring back @JudgeJeanine [11] Pirro. The Radical Left Democrats, working closely with their beloved partner, the Fake News Media, is using every trick in the book to SILENCE a majority of our Country. They have all out campaigns against @FoxNews [12] hosts who are doing too well. Fox …..

Who do you think Fox News’ audience wants to see more?

The question answers itself.

Why Fox News for Brazile? Brazile explained in a blog post [14] on the Fox News website why she decided to join the conservative-leaning news channel.

“In order for us to best decide as a people how to better protect and preserve our way of life, we need to first be able to hear what others are saying without the filter of bias and contempt,” Brazile wrote.

“Not until we once again become practiced at treating those of differing views with civility and respect can we begin to join together to solve the myriad of problems our country must overcome.”

“And that’s exactly why I am so excited to join the honest and passionate debate at Fox News about our future. I invite you to join me.”

That’s all well and good — but we think most Fox News viewers would be far more excited about Judge Jeanine Pirro’s return than the hiring of a longtime Democrat Establishment figure.

Read more at ThePoliticalInsider.com:
Why Does The Subject Of Reparations Divide The Country? [17]
Colorado Becomes the 12th Blue State to Support Ditching the Electoral College [18]
Ocasio-Cortez Lashes Out As Unfavorable Rating Skyrockets [19]