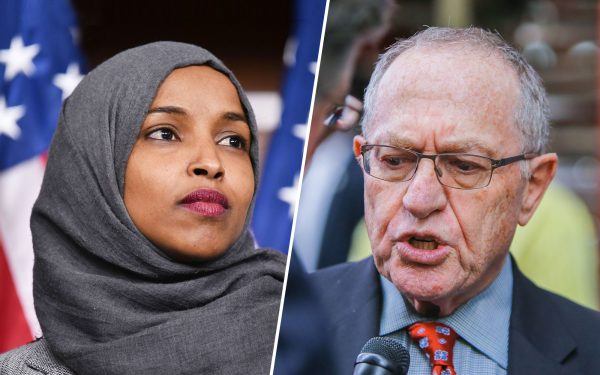 Dershowitz spoke Monday on Fox News’ “Fox & Friends.” He expressed outrage over the comments Omar made last week during an event in Washington, D.C. She complained about why it wasn’t “OK” for her to talk about the “political influence” Jewish Americans have had on U.S. policies.

“I want to talk about the political influence in this country that says it is OK for people to push for allegiance to a foreign country,” Omar said, apparently referencing Israel.

“I want to ask why is it OK for me to talk about the influence of the NRA [National Rifle Association], of fossil fuel industries, or Big Pharma — and not talk about a powerful lobbying movement that is influencing policy,” Omar continued.

The congresswoman fielded swift and bipartisan backlash after making these comments [1] — including rebukes from high-ranking House Democrats.

And now House Democrats are preparing to vote on a resolution addressing Omar’s remarks on Wednesday, according to Politico [2]. They reportedly began crafting the resolution over the weekend as they discussed how to respond to the troubling comments.

“She is so anti-American. She accuses American members of Congress — men and women, Jewish, Christian — she accuses them essentially of doing it for the money,” Dershowitz said of Omar. “We know that Americans overwhelmingly support Israel because Israel is a democracy. It’s America’s strongest ally in the Middle East.”

“And I think that response in Congress has been appropriate — to condemn her and to marginalize her and to make sure people understand she didn’t run on this platform. This is a bait-and-switch. She has gotten in Congress now and she has taken it on herself to present the strongest anti-Israel case in modern history that any member of Congress has ever tried to present,” Dershowitz added.

The people who aren’t rebuffing her are the “radicals in the Democratic Party,” such as Rep. Alexandria Ocasio-Cortez (D-N.Y.) and Rep. Rashida Tlaib (D-Mich.). The latter is one of the other two Muslim women elected to Congress, Dershowitz said.

“[Omar] told her constituents when she ran that she would support America. And she is not. She is supporting America’s enemies and undercutting American values,” Dershowitz said. “And it really goes back to some of the anti-Semitic tropes of the early 20th century and late 19th century, and she ought to be ashamed of herself.”

House Democrats “must marginalize her and distance her from the center of the party,” Dershowitz insisted.

But Omar doubled down on her comments on Sunday. She responded to Lowey’s criticism directly on Twitter.

“I should not be expected to have allegiance/pledge support to a foreign country in order to serve my country in Congress or serve on committee,” Omar wrote. “I have not mischaracterized our relationship with Israel — I have questioned it and that has been clear from my end.”

“I am told every day that I am anti-American if I am not pro-Israel. I find that to be problematic and I am not alone. I just happen to be willing to speak up on it and open myself to attacks,” Omar added. “Being opposed to [Israeli Prime Minister Benjamin] Netanyahu and the occupation is not the same as being anti-Semitic. I am grateful to the many Jewish allies who have spoken out and said the same.”

“We must be willing to combat hate of all kinds while also calling out oppression of all kinds. I will do my best to live up to that. I hope my colleagues will join me in doing the same,” Omar insisted.

Our democracy is built on debate, Congresswoman! I should not be expected to have allegiance/pledge support to a foreign country in order to serve my country in Congress or serve on committee. The people of the 5th elected me to serve their interest. I am sure we agree on that! https://t.co/gglAS4FVJW [3]

Last month, Omar also fielded bipartisan backlash when she suggested on Twitter that money from pro-Israel lobbyists drove Republican support for — and the defense of — Israel. She pointed specifically to the lobbying group American Israel Public Affairs Committee (AIPAC).

House Democratic leaders released a statement condemning her remarks at the time.

She formally apologized after that in a statement posted to Twitter, [5] with the words, “Listening and learning, but standing strong.”

But the congresswoman also warned, “At the same time, I reaffirm the problematic role of lobbyists in our politics, whether it be AIPAC, the NRA or the fossil fuel industry. It’s gone on too long and we must be willing to address it.”